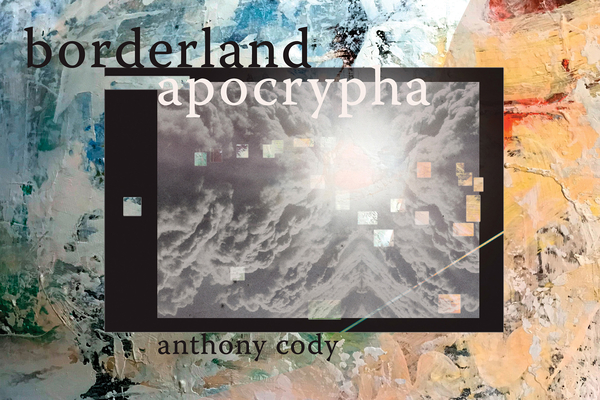 The 1848 Treaty of Guadalupe Hidalgo marked an end to the Mexican—American War, but it sparked a series of lynchings of Mexicans and subsequent erasures, and long-lasting traumas. This pattern of state-sanctioned violence committed towards communities of color continues to the present day. Borderland Apocrypha centers around the collective histories of these terrors, excavating the traumas born of turbulence at borderlands. In this debut collection, Anthony Cody responds to the destabilized, hostile landscapes and silenced histories of borderlands. His experimental poetic reinvents itself and shapeshifts in both form and space across the margin, the page, and the book in forms of resistance, signaling a reclamation and a re-occupation of what has been omitted. The poems ask the reader to engage in searching through the nested and cascading series of poems centered around familial and communal histories, structural racism, and natural ecosystems of borderlands. Relentless in its explorations, this collection shows how the past continues to inform actions, policies, and perceptions in North and Central America.

Rather than a proposal for re-imagining the US/Mexico border, Cody’s collection is an avant-garde examination of how borderlands have remained occupied spaces, and of the necessity of liberation to usher the earth and its people toward healing. Part auto-historia, part docu-poetic, part visual monument, part myth-making, Borderland Apocrypha unearths history in order to work toward survival, reckoning, and the building of a future that both acknowledges and moves on from tragedies of the past.

Anthony Cody is a CantoMundo fellow and MFA candidate at Fresno State University. His poetry has appeared in Gulf Coast, Ninth Letter, Prairie Schooner, TriQuarterly, and The Boiler, among others.

"This book creates a new mechanism of critique through its forensic and conspiratorial speaker who gathers the dearth of evidence left behind by imperialism’s worse offenders and parses out a thrilling and trenchant document on the U.S. West’s legacy anti-Mexican bigotry. 'The inheritance of the elsewhere is a cave of collapse,' writes Cody in a collection that will change the way we think about recovering histories."
— Carmen Giménez-Smith

"Because the document is always part of poetry in the general sense Shelley wrote about. Because the concept never did exceed politics or position. Because everything must change. Because the unaccountable, the disavowed, the apocryphal are the only metadata you’ll find in our nudes. Because whiteness is an extractive enterprise. Because patriarchy would look us in the face and think we’ll keep its secrets. Because with this history we’re not trying to accept the choice between having been colonizer or colonized. Because who, if we’re embraced or estranged from whiteness to suit whiteness, would hear us among the racial orders? Because vigilance committees now have Facebook groups, publicly funded military-grade weapons and surveillance technologies. Because our bodies are monetized in private prisons and in political speech. Because we’re not trying to confuse our faces with our masks. Because from the formal exigencies of document and concept, Anthony Cody delivers poetry back to the general sense of ritual and charm, a gnosis that takes its shape at the double edge of the words and the transmitting body. And because everything must change, the transit leads from here to the dead and back."
— Farid Matuk

"Read Cody’s investigations, these beyond-poems, the Treaty of Guadalupe Hidalgo of 1848, Mexican Indian lands, the untold occupations of America —  as if you are hanging on that open-air killing tree. Notice the vortex of existence, yours, ours, the trapezoids of punishments, the dotted lines and splattered shapes of skin-text and the searing howls cut down the middle of the word bodies, usurpation, rape and theft bursting across the emptiness pages, terminations and exiles pinned on the Race Grid. Open these scrolls and peer at half-humanity America cutting you down, dangling — there is no wall after all, just a mirror of executions, 'reach for the hand of a friend' 'in a dream,'  you are the 'savage captured,' the 'KickingSingingKickingSinging chant,' you are the segmented ink-jitters on Cody’s pages, you are the 'atomic' Brown radiating yourself out of the 1850’s into this present of border mania. Read Cody ’s script, like no other — a photo-zoom of tragic roots and revelations, cartographies of 'power and control,' and the transcendence of innocent bodies, somehow — American soul. Cody presents what has not been revealed, what must be said. This one-of-a-kind-book settles all cases against all border-crossers. It is possible: a brave, bold syntax, an unseen intelligence of ourselves, a new America. Bravo for these compassionate and brutal time-spaces, this brisling land voice— an exemplar of a bursting literature. Everything starts over now."
— Juan Felipe Herrera

"Intense feeling, empathy, rage, compassion swerves language, torques the page. History and data inflict. Intelligence composes, sequence wrestles with violence. It must be witnessed, expressed. The love is expression. Witness is form."
— Mei-mei Berssenbrugge, Judge of the Open, author of Hello, the Roses