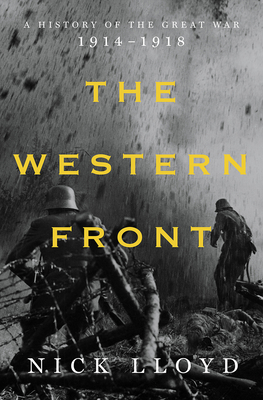 The Telegraph • Best Books of the Year

The Times of London • Best Books of the Year

A panoramic history of the savage combat on the Western Front between 1914 and 1918 that came to define modern warfare.


The Western Front evokes images of mud-spattered men in waterlogged trenches, shielded from artillery blasts and machine-gun fire by a few feet of dirt. This iconic setting was the most critical arena of the Great War, a 400-mile combat zone stretching from Belgium to Switzerland where more than three million Allied and German soldiers struggled during four years of almost continuous combat. It has persisted in our collective memory as a tragic waste of human life and a symbol of the horrors of industrialized warfare.

In this epic narrative history, the first volume in a groundbreaking trilogy on the Great War, acclaimed military historian Nick Lloyd captures the horrific fighting on the Western Front beginning with the surprise German invasion of Belgium in August 1914 and taking us to the Armistice of November 1918. Drawing on French, British, German, and American sources, Lloyd weaves a kaleidoscopic chronicle of the Marne, Passchendaele, the Meuse-Argonne, and other critical battles, which reverberated across Europe and the wider war. From the trenches where men as young as 17 suffered and died, to the headquarters behind the lines where Generals Haig, Joffre, Hindenburg, and Pershing developed their plans for battle, Lloyd gives us a view of the war both intimate and strategic, putting us amid the mud and smoke while at the same time depicting the larger stakes of every encounter. He shows us a dejected Kaiser Wilhelm II—soon to be eclipsed in power by his own generals—lamenting the botched Schlieffen Plan; French soldiers piling atop one another in the trenches of Verdun; British infantryman wandering through the frozen wilderness in the days after the Battle of the Somme; and General Erich Ludendorff pursuing a ruthless policy of total war, leading an eleventh-hour attack on Reims even as his men succumbed to the Spanish Flu.

Brimming with vivid detail and insight, The Western Front is a work in the tradition of Barbara Tuchman and John Keegan, Rick Atkinson and Antony Beevor: an authoritative portrait of modern warfare and its far-reaching human and historical consequences.

One of Britain’s new generation of military historians, Nick Lloyd is a Professor of Modern Warfare at King’s College London and the author of four books on World War I, including Hundred Days and Passchendaele. He lives in Cheltenham, England.

This is a bold book. Nick Lloyd has written a tour de force of scholarship, analysis and narration… If this volume is anything to go by, Lloyd is well on the way to writing a definitive history of the First World War.
— Laurence James - The Times

An admirably clear and judicious narrative of the battlefield course of events…Lloyd’s book will be cherished by military history buffs.
— Max Hastings - The Sunday Times

Distinguished by its trenchant observations and massive level of detail marshaled into a fluid narrative, this is a sterling record of WWI’s most consequential theater.
— Publishers Weekly, starred review

This well-researched, well-written and cogently argued new analysis overturns all our assumptions and received wisdom about the fighting on the most important front of the Great War. Nick Lloyd deserves congratulation for having written what will undoubtedly now take its rightful place as the standard account of this vital theatre of the conflict.
— Andrew Roberts, author of Churchill: Walking With Destiny

Although a non-specialist in the history of World War I, I have sought to learn as much as possible about that epochal calamity that cast a dark shadow over the subsequent century. At the core of a generation's agony was the Western Front, which I never fully understood until I read Nick Lloyd's comprehensive, lucid, and evocative narrative that made starkly clear what had previously been a confusing jumble.
— James M. McPherson, Pulitzer Prize-winning author of The Battle Cry of Freedom: The Civil War Era

An enthralling read. Lloyd deftly guides us through a labyrinth of military detail while never allowing the pace of his narrative to slacken. His account of France’s role on the Western Front, often less well documented in Anglo-Saxon accounts, is particularly revealing. Most of us are familiar with the names of the generals involved, but Lloyd brings them sharply to life with his sensitive portrayal of their personalities, idiosyncrasies and relationships with one another. This is an endlessly complex subject to which Lloyd has brought welcome lucidity while never for one moment allowing us to forget the enormity of its tragedy.
— Julia Boyd, author of Travelers in the Third Reich: The Rise of Fascism Through The Eyes of Everyday People

There were many fronts in World War I, but the Western Front, where the industrialized great powers massed their men and resources, was the crucial one. Nick Lloyd has given us the most up-to-date account of the fighting there. He brings the key statesmen and generals to life, as well as the brutal combat from the first battles to the last. Lloyd crisply details the tactical and technological innovation that brought victory, as well as the coalition strategy, economic warfare, and home front management that boosted the Allies and disintegrated the Central Powers.
— Geoffrey Wawro, author of Sons of Freedom and director of the University of North Texas Military History Center