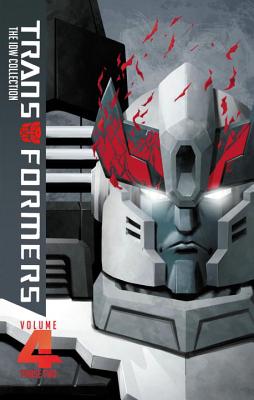 This is book number 4 in the IDW Collection Phase Two series.

Presenting IDW's Transformers comics in recommended reading order, including one-shots, crossovers, and event series! It's everything a beginner could need, everything a diehard could want.

In the early days of the war on Cybertron, two leaders start down their paths towards destiny. Meanwhile, on current day Cybertron, Megatron is back! Everything Bumblebee and his Autobots have built teeters on the edge of collapse–and Starscream has to make the choice his whole life has been leading to. On the Lost Light, a secret prisoner is confined in the bowels of the ship.

Collects the Monstrosity mini-series, Robots in Disguise #12–18, and More Than Meets the Eye #14–16.

Flint Dille is a screenwriter, game designer, and novelist. He is best known for his animated work on Transformers, G.I. Joe, An American Tail: Fievel Goes West, and his game-writing, The Chronicles of Riddick: Escape from Butcher Bay, and Dead to Rights, as well as his non-fiction book written with John Zuur Platten.