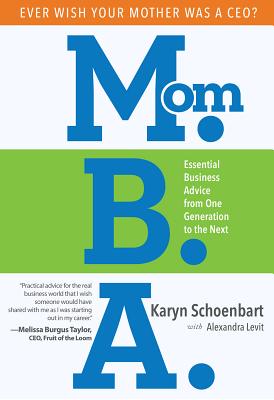 Imagine what your life would be like if your mother was the CEO of a global company. She could provide the type advice that would propel your career and help you overcome the many stumbling blocks that keep people from fulfilling their full potential at work. That s the idea behind Mom.B.A. Essential Business Advice from One Generation to the Next by Karyn Schoenbart, CEO of The NPD Group, and a highly acclaimed business leader.
Mom.B.A. is an insider s guide to career success, based on Schoenbart s lessons to her daughter Danielle, now an established businesswoman in her own right. Even if you don t have a CEO for a mom, Karyn's lessons on everything from effective first impressions and workplace politics to relationship development, skill building, and priority-setting will take you further than you ever thought possible.
Mom.B.A. is divided into the following information-packed chapters:

As Chief Executive Officer of The NPD Group, Karyn oversees NPD’s global Commercial Practices, Product, IT and Operations, leading the firm’s strategic expansion with the introduction of analytic solutions that complement its industry leading sales and market share data. She has over 30 years of experience in the market research field, with expertise in identifying and developing new business opportunities and client partnerships.

Previously, Karyn was President and Chief Operating Officer.  Prior to that, she was President of NPD’s Syndicated Tracking Services, where she launched the first POS tracking services in North America for Prestige Beauty, Fashion Footwear, and Housewares. Prior to that, Karyn ran NPD’s Custom Research Business.

Karyn received the 2016 Long Island Brava Award, which recognizes high-impact female business leaders, and was named one of the Top 25 Most Influential Women of the Mid-Market for 2016 and 2015 by the CEO Connection®. She is also a recipient of the 2017 Legacy Award from Women in Consumer Technology, an organization that promotes the advancement of women in the consumer technology industry. She currently serves on the ARF Women in Analytics Board and the advisory board of The Resolution Project, a nonprofit organization that develops socially-responsible young leaders. Karyn has also served on the boards of directors of CivicScience and CASRO, the Council of American Survey Research Organizations. She regularly teaches classes in leadership and developing client relationships and is a frequent speaker at industry conferences and events. Karyn graduated from the University of Massachusetts, summa cum laude.

Alexandra Levit’s goal is to prepare organizations and their employees for meaningful careers in the future workplace. A former nationally syndicated columnist for the Wall Street Journal and writer for the New York Times, Fast Company, and Forbes, Alexandra has authored several books, including the international bestseller They Don't Teach Corporate in College.

Alexandra recently became a partner with organizational development firm PeopleResults. She consults and writes on leadership development, human resources, entrepreneurship, career and workplace trends on behalf of numerous Fortune 500 companies including American Express, Canon, Deloitte, DeVry University, Intuit, SilkRoad, and Staples, and has spoken on these topics at hundreds of organizations around the world including Abbott, Aetna, Bank of America, Cardinal Health, Campbell Soup, the Federal Reserve Bank, the Human Capital Institute, McDonalds, Microsoft, PepsiCo, the Society of Human Resource Management, and Whirlpool.

In the last several years, Alexandra has conducted proprietary research on the future of work, the millennial generation, gender differences and bias, and the skills gap. She also served as a member of Business Roundtable's Springboard Project, which advised the Obama administration, the U.S. Department of Labor, and the U.S. Department of Defense on current employment issues.

Alexandra is also a frequent national media spokesperson and is regularly featured in outlets including USA Today, National Public Radio, CNN, ABC News, CNBC, Forbes, the Associated Press, and Glamour. She was named an American Management Association Top Leader for 2015 and 2014 and has also been Money Magazine's Online Career Expert of the Year and the author of one of Forbes' best websites for women.

A member of the Northwestern University Council of 100 and the Young Entrepreneur Council, Alexandra received the prestigious Emerging Leader Award from her alma mater. The award honors a Northwestern graduate under 35 who had made a significant impact in her field and in society. She resides in Chicago, IL with her husband Stewart and their two young children.