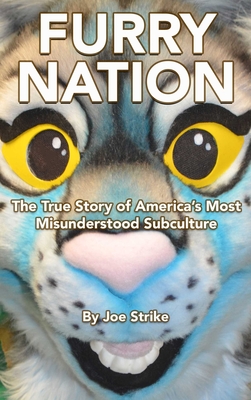 Winner of the 2017 Ursa Major Award for Best Non-Fiction Work!

Furry fandom is a recent phenomenon, but anthropomorphism is an instinct hard-wired into the human mind: the desire to see animals on an equal footing with people. It's existed since the beginning of time in prehistoric cave paintings, ancient gods, and tribal rituals. It lives on today--not just in the sports mascots and cartoon characters we see everywhere, but in stage plays, art galleries, serious literature, performance art--and among furry fans who bring their make-believe characters to life digitally, on paper, or in the carefully crafted fursuits they wear to become the animals of their imagination.

In Furry Nation, author Joe Strike shares the very human story of the people who created furry fandom, the many forms it takes--from the joyfully public to the deeply personal-- and how Furry transformed his own life.

Joe Strike's articles on film, TV, animation and related topics have appeared in a variety of publications including the New York Daily News, Newsday, and the New York Press. He has been a regular contributor to the entertainment industry website Animation World Network (awn.com) since 2000 and has interviewed countless cartoon luminaries including Hayao Miyazaki, John Lasseter, Brad Bird, and Lauren Faust, creator of My Little Pony: Friendship is Magic. Joe served as a writer/producer of on-air promotional campaigns for Bravo and the Sci-Fi Channel, where he worked with talents like Stan Lee, Ralph Bakshi and the cast of Mystery Science Theatre 3000. He has scripted the Nick Jr. TV series Wow! Wow! Wubbzy! and is the author of the kids' comedy/adventure novel The Incredible Hare.

"Here is a vital and encyclopedic resource for all who are interested in the anthropomorphic fandom. Encompassing its beginnings and providing a comprehensive overview to the present day, it immediately attains the status of required reading...among all species." --Bill Holbrook, author of Kevin & Kell
— Reviews

"Joe Strike has been in furry fandom for over 25 years, and he knows it in depth. I am glad he has taken the time to get the history of furry right in Furry Nation." --Fred Patten, a founding father of furry fandom
— Reviews

"As an outsider of this community, I was entertained and enlightened by Furry Nation. Thanks to Strike's years of dedication and reporting, I came to better understand and appreciate the depth and breadth of this artistic and creative community. Furs will be thrilled with an accurate, positive portrayal of their subculture by one of their own and regular humanoids like me will be treated to a colorful history of a community unlike any other." --Nicole Guappone, sex writer and essayist previously published by The Rumpus, Glamour, and others
— Reviews

"A lively and personal account of this new evolving species." --Thomas Thwaites, author of GoatMan: How I Took a Holiday from Being Human
— Reviews

"This is the most comprehensive history of Furry Fandom that has ever been written. Painstakingly researched, it follows the evolution of Mankind's fascination with anthropomorphics from its earliest roots in history (and pre-history) to the worldwide phenomenon that we know today. Joe combines his own recollections with those of dozens of other "greymuzzles" to tell the story of how a ragtag bunch of special interest groups unwittingly awakened millions of people to their own inner animals. This is indeed a remarkable book about a remarkable fandom, lovingly assembled by a remarkable man - even if he did choose a picture that makes me look fat." --Dr. Samuel Conway a.k.a. "Uncle Kage", chairman of Anthrocon
— Reviews

"To stereotype all "furries" as sexual fetishists is to ignore the prevalence of anthropomorphic animals in human culture, from cave paintings to animated movies to graphic novels and newspaper comic strips. Furry Nation offers an honest, candid glimpse into all aspects of American furdom... Highly recommended." --Midwest Book Review
— Reviews