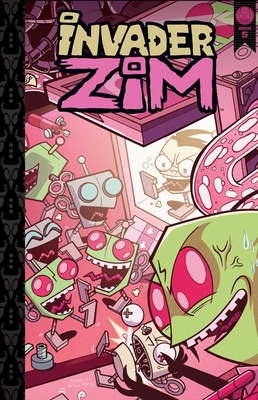 This is book number 5 in the Invader ZIM series.

This collection featuring issues #41-50 of the critically acclaimed Invader ZIM comic has been genetically enlarged for your reading pleasure—no straining necessary!

We’re back at it to prove once and for all that good things can also come in big packages. This collection featuring issues #41-50 of the critically acclaimed Invader ZIM comic has been genetically enlarged for your reading pleasure—no straining necessary! Includes the secret origins of Lil’ Meat Man, the four-part Battle Void storyline, and, of course, the grand finale of the fabled Chammy Wamboo's ploy to make Zim and Dib best friends, written by control brain Jhonen Vasquez himself.

Sam Logan is best known as the creator of Sam and Fuzzy, a massive comedy adventure series that he has been writing and illustrating for over 15 years. He's also either partly or completely responsible for President Dog, Skull Panda, the Underground RPG, and a lot of unrelated problems. He lives in Vancouver, BC with his two dogs. (They're very good boys.)