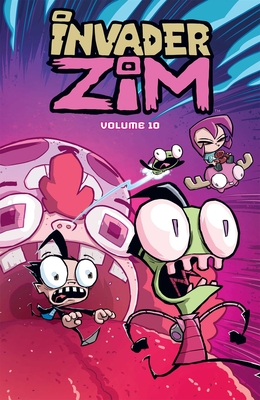 This is book number 10 in the Invader ZIM series.

The tenth and final volume in the bestselling Invader ZIM comic series based on the hit Nickelodeon TV show!

Don't miss this explosive collection of Invader ZIM comics! (Yes, there are actually explosions in this one.) PREPARE YOUR HUMAN EYE SPHERES for a planet unlike anything ZIM and Dib (and GIR I guess) have ever seen--populated entirely by OTHER ZIMS! As in, ZIMs from alternate timelines! But still the horrible, evil ZIM Dib knows all too well.

Can Dib join the resistance (of ZIMS) and take down the planet's ruler (a ZIM), thus saving every universe (from ZIMS)? And which is worse: a planet full of ZIMs or one new kid named CHAMMY WAMBOO who desperately wants ZIM and Dib to be BEEEEEEST FRIEEEEEENDS? Don't answer until after you've read the full collection!

Sam Logan is best known as the creator of Sam and Fuzzy, a massive comedy adventure series that he has been writing and illustrating for over 15 years. He's also either partly or completely responsible for President Dog, Skull Panda, the Underground RPG, and a lot of unrelated problems. He lives in Vancouver, BC with his two dogs. (They're very good boys.)

Maddie C. lives in Richmond, Virginia, collects vinyl but doesn't have a record player, and is prepared for the day the yo-yo comes back in style.