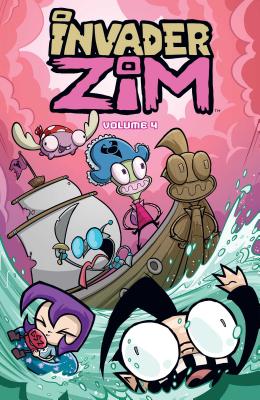 This is book number 4 in the Invader ZIM series.

ZIM has plans to take over planet Earth. Schemes! Designs! Machinations! Uh... other words that mean "plans"! And in the fourth volume of the critically acclaimed comic series, these "plans" are plentiful, horrifying, and only half as terrible as usual! From taking over a local restaurant to proving to Dib that he's the master of fear, ZIM will rule the world, one way or another! Or not at all. Or only on Tuesdays?