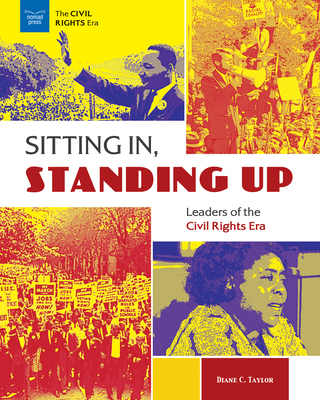 A collective biography about five influential leaders of the Civil Rights Era Part of a new series on the Civil Rights Movement for ages 12 to 15 from Nomad Press. Perfect for kids interested in how history led to the Black Lives Matter movement. Sitting In, Standing Up: Leaders of the Civil Rights Era tells the story of one of the most tumultuous and important eras in American history through the lives of five major figures of the Civil Rights Movement of the 1950s and 1960s: Thurgood Marshall, Fannie Lou Hamer, Martin Luther King, Jr., Ella Baker, and John Lewis. The work of these people sparked the passion of a nation and helped change the tide of social injustice in a way that reverberates to this day. Before learning about the changes that characterize the Civil Rights Movement, readers ages 12 to 15 establish foundational knowledge of the very concept of civil rights--why was an entire movement necessary to make the promise of civil rights, contained in the United States Constitution, a reality for African American people? Kids learn about the Bill of Rights, Jim Crow segregation laws, and the civil rights and social justice issues that concern the public today. Armed with this background knowledge, they dive into the stories and deeds of the major leaders of the movement and distinguish the giant steps forward, the frequent backslides, and the ever-present current of determination and passion that drove these people toward the ideal they knew their country could achieve. And today, we're seeing that the job is still unfinished, as protestors take to the streets and make their voices heard in a call for anti-racism at all levels of society. Who are today's leaders? Hands-on projects and research activities alongside essential questions, links to online resources, and text-to-world connections promote a profound understanding of history and offer opportunities for social-emotional learning. Face down hatred with Fannie Lou Hamer and her heroic efforts to make the right to vote more than an empty promise for black Americans. Learn about endurance with Ella Baker, the behind-the-scenes organizer and grass roots activist whose work in the civil rights movement spanned five decades. Travel the road to nonviolent civil disobedience with Martin Luther King, Jr., the young Baptist minister who became the most recognizable face of the civil rights movement and whose commitment to peaceful forms of protest stood in stark contrast to the violence to which black activists were frequently subjected. His 1968 assassination marked the end of an era and triggered waves of racial unrest. Watch John Lewis rise from the lowest rung of African American society in the sharecropping South to one of the highest elected offices in the land. Plus, explore the anger and hope of Malcolm X and the Nation of Islam. Meets multiple standards for the National Curriculum Standards for Social Studies. Uses an inquiry-based approach to encourage readers to explore the present status of civil rights for blacks in the United States. Projects include Reading and responding to primary sources such as the Bill of Rights, Staging a debate on a current civil rights issue, and Researching the history of women's right to vote. About the Civil Rights Movement series and Nomad Press Sitting In, Standing Up: Leaders of the Civil Rights Era is part of a new series from Nomad Press, The Civil Rights Era, that captures the passion and conviction of the 1950s and '60s. Other titles in this set include Boycotts, Strikes, and Marches: Protests of the Civil Rights Era, Singing for Equality: Musicians of the Civil Rights Era, and Changing Laws: Politics of the Civil Rights Era. Nomad Press books in The Civil Rights Era series integrate content with participation. Combining engaging narrative with inquiry-based projects stimulates learning and makes it active and alive. Nomad's unique approach simultaneously grounds kids in factual knowledge while allowing them the space to be curious, creative, and critical thinkers. All books are leveled for Guided Reading level and Lexile and align with Common Core State Standards and Next Generation Science Standards. All titles are available in paperback, hardcover, and ebook formats.

Diane C. Taylor is a freelance writer whose published works include both fiction and nonfiction. She is the author of The Science of Natural Disasters: When Nature and Humans Collide; Gutsy Girls Go for Science: Engineers; The Renaissance Thinkers; and The Renaissance Artists. Diane lives in Bowling Green, Kentucky.