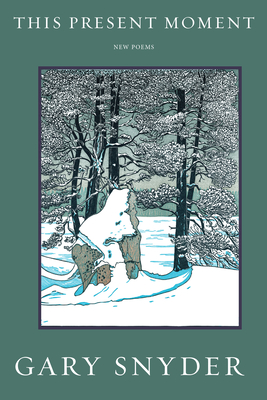 "This present moment
That lives on

For his first collection of new poems since his celebrated Danger on Peaks, published in 2004, Gary Snyder finds himself ranging over the planet. Journeys to the Dolomites, to the north shore of Lake Tahoe, from Paris and Tuscany to the shrine at Delphi, from Santa Fe to Sella Pass, Snyder lays out these poems as a map of the last decade. Placed side–by–side, they become a path and a trail of complexity and lyrical regard, a sort of riprap of the poet's eighth decade. And in the mix are some of the most beautiful domestic poems of his great career, poems about his work as a homesteader and householder, as a father and husband, as a friend and neighbor. A centerpiece in this collection is a long poem about the death of his beloved, Carole Koda, a rich poem of grief and sorrow, rare in its steady resolved focus on a dying wife, of a power unequaled in American poetry.

As a friend is quoted in one of these new poems:

"I met the other lately in the far back of a bar,
musicians playing near the window and he
sweetly told me "listen to that music.

The self we hold so dear will soon be gone.""

Gary Snyder is one of the greatest American poets of the last century, and This Present Moment shows his command, his broad range, and his remarkable courage.

Gary Snyder is the author of more than twenty collections of poetry and prose. Since 1970 he has lived in the watershed of the South Yuba River in the foothills of the Sierra Nevada. Winner of the Pulitzer Prize in 1975, Snyder has also been awarded the Bollingen Prize for Poetry and the Robert Kirsch Lifetime Achievement Award. His 1992 collection, No Nature, was a National Book Award finalist, and in 2008 he received the Ruth Lilly Poetry Prize. Snyder is a poet, environmentalist, educator and Zen Buddhist.

"This Present Moment maintains Snyder's steadfast, wise witnessing as he walks a Siberian Outpost meadow, gazes at clear–cut forest, or considers changing farmland in Italy. Snyder's clearsightedness and meditative voice, even in the face of struggle or destruction, give the work much of its power."—Christian Science Monitor

"Snyder has parceled out the decade since his last poetry collection (Danger on Peaks) into textured poems of a rare and welcome candor."—Publisher's Weekly

"[E]ach of the moments of these poems is completely open, even when, as in the long, particular poem about the death of Snyder's late–life love, "Go Now," it resounds with deep personal emotion. The moment of a Snyder poem is the "Eternal Now" of mindfulness and awareness, a good place to be."—Booklist

"Snyder is an elder statesman of the natural world and the tribal unions of poetry. He has a body of work as original as predecessors William Carlos Williams and Wallace Stevens."—The Bloomsbury Review

"His greatest strength—a quiet and profound elegance, an ability to write a simple phrase that seems to have been echoing through human consciousness for three or four thousand years."—Lewis MacAdams, California Magazine

"This poet's great gift has always been perfect visual clarity . . . and, needless to say, derives from Snyder's vision in the larger sense."—Paul Berman, Village Voice

"What thoughtful beauty! How skillfully Gary Snyder interfuses the practical knowledge of an animal sense with story, language, and song. True teachers in America are now an endangered species. I learn so much from this good man's perception, humor, discipline, and love for this world."—James Hillman