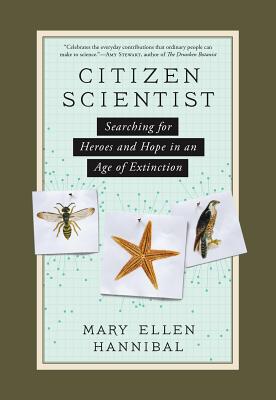 By Mary Ellen Hannibal
for information about purchasing this book, please contact orders@bookpassage.com

Citizen science might just be our last, best chance to fight extinction. But is there really hope for threatened species? Mary Ellen Hannibal needed to find out.

Hannibal, an award-winning writer and emerging emissary from scientists to the public, sets out to become a citizen scientist herself. In search of vanishing species, she wades into tide pools, follows hawks, and scours mountains. The data she collects will help environmental research—but her most precious discovery might be her fellow citizen scientists: a heroic cast of volunteers devoting long hours to helping scientists measure—and even slow—today’s unprecedented mass extinction.

A consummate reporter, Hannibal digs into the origins of the tech-savvy citizen science movement—tracing it back through centuries of amateur observation by writers and naturalists. Prompted by her novelist father’s sudden death, she also examines her own past and discovers a family legacy of looking closely at the world. Her personal loss only fuels her quest to bear witness to life, and so she ultimately returns her gaze to the wealth of species still left to fight for.

Combining research and memoir in impassioned prose, Citizen Scientist is a literary event, a blueprint for action, and the story of how one woman rescues herself from an odyssey of loss—with a new kind of science.

Mary Ellen Hannibal’s work has appeared in The New York Times, San Francisco Chronicle, Esquire, and Elle, among many other outlets.

“Inspired by the likes of marine biologist Ed Ricketts, [Mary Ellen Hannibal] records starfish die-offs, meets the geeks who track deforestation, and plans a web-based supercommunity of citizen scientists to counter what many are calling the sixth great extinction. A cogent call to action.”—Nature

“Intelligent and impassioned, Citizen Scientist is essential reading for anyone interested in the natural world.”—San Francisco Chronicle

“Author and avid citizen scientist Mary Ellen Hannibal traces an astonishing diversity of volunteer-enabled projects. . . . Citizen Scientist made me want to jump off the couch and download everything from the Spotter Pro app, intended to keep ships from colliding with whales, to Story Maps, which allows users to create and annotate interactive maps.”—Science

“[A] celebration of nonexperts’ contributions to science.”—Scientific American

“From the intimate moments of an individual’s life to the larger narratives of communities, Citizen Scientist tells stories that weave together a grand narrative of our planet through our engagements with science. [Hannibal’s] account demonstrates the collaborative nature of citizen science, describing what it means to participate in naturalistic observation.”—Discover magazine

“Part personal adventure story and natural history, Hannibal proves herself to be an inspiring writer.”—Foreword

“Hannibal has a conversational writing style that moves quickly from topic to topic, punctuated with humorous and thoughtful asides. . . . Although centered in California, the book has a global message: Humans have much in common with the species we’re trying to save.”—Science News

“Readers of popular science, especially those with a literary bent, will enjoy this heartfelt argument for citizen science—that it might be our last, best hope for solving myriad environmental predicaments.”—Library Journal

“The idea that science is something for a caste of high priests to attend to is simply wrong: Science is all around us, and we each can revel in its pleasures and processes. This is a stirring, empowering narrative.”—Bill McKibben, author of Eaarth

“Species are going extinct a thousand times faster than they should. But how do we know which, and where, and why? No expensive machine counts biodiversity. Our knowledge comes from the ‘citizen scientist.’ That’s you and me, armed with a notebook or a smartphone—and with the priceless attributes of passion and curiosity. This book tells that story brilliantly.”—Stuart Pimm, Doris Duke Chair of Conservation Ecology, Nicholas School of the Environment, Duke University

“Deeply informed and highly readable, this is as much a soul-search as a book about science. Fortunately for us, Mary Ellen Hannibal locates some luminous souls who, by the light of their knowledge and determination, can lead us out of these dark times for life on Earth.”—Carl Safina, author of Beyond Words; What Animals Think and Feel

“What an extraordinary book!  Mary Ellen Hannibal weaves together natural history, cutting-edge technology, and her own adventures into a story that is certain to inspire.”—Amy Stewart, author of The Drunken Botanist

“One of Hannibal’s themes in this ambitious new book is the ‘double narrative,’ or the contradiction between what we tell ourselves we are doing every day and what is really going on. She explains that empires have been built on a biotic cleansing of species, the loss of which now threatens the very foundation of our lives. Hannibal poses citizen science, or the contribution of amateurs to research, as a platform not only for change, but also as a new way of seeing without the old blinders. Invoking literary, historic, and scientific touchstones, and telling a personal story as well, she provides what citizen scientists John Steinbeck and Ed Ricketts called the ‘toto picture.’ We can’t afford to see the Earth any other way.”—Paul R. Ehrlich, Bing Professor of Population Studies and the president of the Center for Conservation Biology at Stanford University