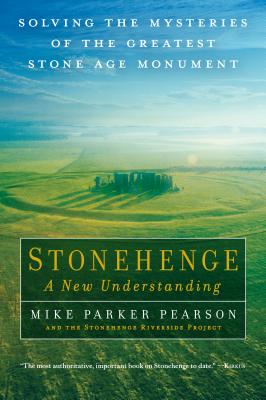 Stonehenge stands as an enduring link to our prehistoric ancestors, yet the secrets it has guarded for thousands of years have long eluded us. Until now, the millions of enthusiasts who flock to the iconic site have made do with mere speculation—about Stonehenge’s celestial significance, human sacrifice, and even aliens and druids. One would think that the numerous research expeditions at Stonehenge had left no stone unturned. Yet, before the Stonehenge Riverside Project—a hugely ambitious, seven-year dig by today’s top archaeologists—all previous digs combined had only investigated a fraction of the monument, and many records from those earlier expeditions are either inaccurate or incomplete.

Stonehenge—A New Understanding rewrites the story. From 2003 to 2009, author Mike Parker Pearson led the Stonehenge Riverside Project, the most comprehensive excavation ever conducted around Stonehenge. The project unearthed a wealth of fresh evidence that had gone untouched since prehistory. Parker Pearson uses that evidence to present a paradigm-shifting theory of the true significance that Stonehenge held for its builders—and mines his field notes to give you a you-are-there view of the dirt, drama, and thrilling discoveries of this history-changing archaeological dig.

Mike Parker Pearson is professor of archaeology at Sheffield University and an internationally renowned expert in the archaeology of death. The author of fourteen books and over 100 academic papers, he led the Stonehenge Riverside Project from 2003 to 2009. He has appeared in the National Geographic Channel documentary Stonehenge Decoded and in the NOVA episode “Secrets of Stonehenge.”

“Because the author cites dozens of digs and scientific analyses—many of which lead to various interpretations—this is a difficult book to summarize without risking oversimplification. Fortunately, Pearson writes in an accessible, easy-to-follow style and provides an array of helpful diagrams,reconstruction sketches, and photographs.”
—Foreword Reviews

“Renowned archaeologist Pearson presents the findings of the most ambitious and scientifically informed investigation of Stonehenge thus far . . . The most authoritative, important book on Stonehenge to date.”
—Kirkus Reviews, starred

“A solid, comprehensive introduction to this important World Heritage Site, showing how an immense archaeological project is conducted from beginning to conclusion. Recommended to all interested readers.”
—Library Journal

“This is brilliantly written scholarship. The book combines old ideas about the circle with the unexpected revelations of today. It is a triumph.”
—Aubrey Burl, author of A Brief History of Stonehenge and seven other books on prehistoric stone circles

“From 2003 to 2009, the archaeologist Mike Pearson led the Stonehenge Riverside Project. . . . His book is a detailed account of that archaeological survey, expressed in a genial style that invigorates the story of the groundwork.”
—Iain Finlayson, The Times (London)

“The book describes one of the outstanding archaeological projects of recent years. It is accessible, original, carefully researched and important. But, above all, it is exciting.”
—Richard Bradley, Reading University

“Parker Pearson has collated [all the research findings], accessibly, in his book.”
—The Guardian