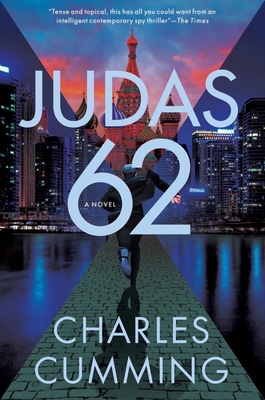 "JUDAS 62 has all you could want from a tense, topical and intelligent spy thriller"—The Times Books of the Year

Thirty years after a deadly attempt to extract a Russian scientist to safety in Ukraine, master spy Lachlan Kite eludes an assassin in the streets of Dubai

After a lifetime working with BOX 88, the transatlantic counterintelligence agency so covert that not even the CIA knows of its existence, master spy Lachlan Kite has made plenty of enemies. And now, as the director of the outfit's operations in the UK, one of those past enemies has him in their sights...

1993: Student Lachlan Kite is sent to post-Soviet Russia, a spy in the guise of a language teacher. Embedded in the town of Voronezh, Kite’s mission is to extract a chemical weapons scientist before the man’s groundbreaking research falls into the wrong hands and shuttle him across the border to freedom in Ukraine. But Kite’s mission soon goes wrong and he is left stranded in a hostile city with a former KGB officer on his trail.

2020: Thirty years after that dangerous mission, Kite discovers that its outcome put his name on the notorious “JUDAS” list—a record of enemies of Russia who have been targeted for assassination. Kite’s fight for survival takes him to Dubai, a city crawling with international intelligence officers, where he enters into a deadly game of cat-and-mouse with the Russian secret state.

JUDAS62 is the next book in the series.

The storytelling is first-rate, with all the minutiae of spycraft, sense of place and memorable supporting characters you could wish for
— Sunday Times

The first Kite novel was excellent, but this is even better — an elegant exposition of what being a spy in the field actually feels like and the fear it can instil in even the most hardened operator. Superbly constructed, it never hurries, but evokes the world of espionage in a way the late John le Carre would have much admired
— Daily Mail

An engrossing cloak-and-dagger thriller that’s both chilling and convincing.
— Kirkus