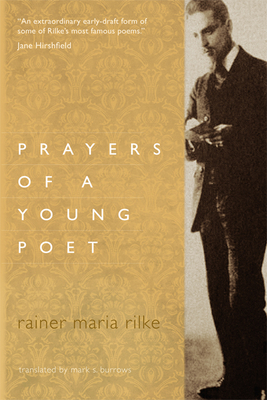 By Rainer Maria Rilke, Mark S. Burrows (Translated by)
Out of Print

Rainer Maria Rilke (1875-1926) was one of the most important German-language poets and writers of the early 20th century. His other poetry collections include Duino Elegies and Sonnets to Orpheus.

Mark S. Burrows is scholar, poet, and teacher, known internationally for his work on theology and spirituality, mysticism and poetics. For more than two decades he taught in several graduate theological schools in the US and Germany. He is also a translator of German poetry and prose into English, and currently lives and teaches in Germany. Recent publications include his widely-celebrated translation of Rilke, Prayers of a Young Poet (Paraclete), and Meister Eckhart’s Book of the Heart (Hampton Roads).

In the spring of 1899, the 23-year-old German poet Rainer Maria Rilke arrived in Moscow for the first time, to be overwhelmed by the Orthodox Ester. The following autumn, now living in Berlin and assuming the literary identity of a Russian monk, he poured out the 67 poems that the American academic Mark Burrows as the Prayers of a Young Poet. Rilke wrote furiously up to nine poems a day, or night, between 20 September and 14 October. His work echoed the identity of the solitary priest he represented, writing in a verse letter to his superior:
I look out across the land; I listen, pray, read, and sometimes paint an icon of St. Nicholas or the holiest one in in the Stoglav style — more than this I can’t manage.
In his search for God, in his celebration of the created and creative world, and through his negotiations between art and faith, Rilke represents the aspirations of many poets looking beyond horizons ruled by humanity.
Much of Rilke’s work emerges from exploratory darkness: “I believe in nights.” Weather conditions theology. The poet-monk brings to his cell experiences from the storms lashing the surrounding forest as metaphors for his wrestling matches with religious possibilities. He takes ideas from the books he reads, and meditates on them in the anguished woods. He struggles to find God, but also luxuriates in his closeness.
Christ appears fleetingly, as “Your Son” in one poem, and through “the wondrous play of powers …rising in the treetops like a resurrection” in another. The monk, like Rilke, remembers a great church in Moscow where “the dome is full of Your Son,/ binding the whole church as one …”
This anonymous “least among monks, an Apostle,” seeks to label God by his discerned qualities: “You stone … You wind … Your dark being.” By the end of the book, the monk is welcoming another “superior,” a survivor among the blind singers who wandered among the Ukrainian poor. The monk’s presence reminds him of all the songs he has forgotten. So Rilke adds a postscript of hope to the holy search of his adopted pilgrim.
—Martyn Halsall, Church Times