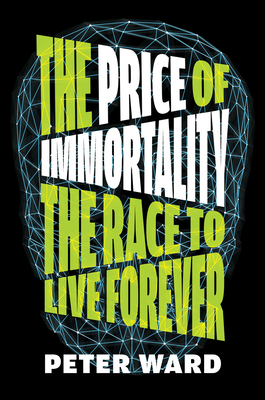 In the tradition of Jon Ronson and Tim Wu,  an absorbing and revelatory  journey into the American Way of Defying Death . . .

As longevity medicine revolutionizes the lives of many older people,  the quest to take the next step—to live as long as we choose—has spurred a scientific arms race in search of the elixir of life, funded by Big Tech and Silicon Valley.

Once the stuff of Mesopotamian mythology and episodes of Star Trek, the effort to make humans immortal is becoming increasingly credible as the pace of technological progress quickens. It has also empowered a wild-eyed fringe of pseudo-scientists, tech visionaries, scam-artists, and religious fanatics who have given their lives over to the pursuit of immortality.

Starting off at the Church of Perpetual Life in Florida and exploring the feuding subcultures around the cryonics industry, Peter Ward immerses himself into an eccentric world of startups, scam artists, scientific institutions, and tech billionaires to deliver this deeply reported, nuanced, and sometimes very funny exploration of the race for immortality — and the potentially devastating consequences should humanity realize its ultimate dream.

Peter Ward is a British business and technology reporter whose reporting has taken him across the globe. Reporting from Dubai, he covered the energy sector in the Middle East before earning a degree in business journalism from the Columbia University Graduate School of Journalism. His writing has appeared in Wired, The Atlantic, The Economist, GQ, BBC Science Focus, and Newsweek.

"Mr. Ward combines thorough reporting and lucid scientific explanations in a fluent and balanced account of a diverse movement. From the tragicomedies of cryonics’ early years, to tales of scam artists and reckless zealots, he is a vivid storyteller" -- The Economist

"The writing is vivid  ... A great intro to the topic ... Those looking to get started on living forever would do well to begin here." - Publishers Weekly

"The Price of Immortality... evaluates with a journalist’s eye our best attempts at life extension, the drama and personalities of the people who surround them, and whether immortality is something humankind should be striving for at all...The tumultuous history of the cryonics movement is fascinating." -- Undark

"An intriguing investigation into a subculture perfectly suited to these end times." -- Sylvia Nasar, author, A Beautiful Mind

"Transhumanism might seem like a fringe movement, but it sheds an unexpected light on hopes, fears, and longings at the very center of our culture. With its engaging mixture of history and firsthand reportage, this fascinating book--informative, melancholy, and darkly funny--is hugely relevant to our current moment, and its insights into the cost of enacting science fiction in real life couldn't have come at a better time."  —Alec Nevala-Lee, author of Astounding: John W. Campbell, Isaac Asimov, Robert A. Heinlein, L. Ron Hubbard, and The Golden Age of Science Fiction

Praise for Peter Ward’s The Consequential Frontier...
"Ward’s fascinating exploration of the possibilities of privatizing interplanetary activities comes at the perfect moment. . . . This savvy work gives readers valuable insight into the ramifications, good and bad, of allowing business into space."—Publishers Weekly

"Ward’s research is impressive, as in the breadth of his detailed resources, and readers fascinated by the exploits of Elon Musk and Jeff Bezos will be particularly intrigued by his findings."—Booklist

"A lucid, bright and essential work of reporting, analysis and genuine care. Peter Ward has given us a new way to think about private endeavors in space. Superb."⁠—Rivka Galchen, author of Little Labors

“A deeply-reported and endlessly entertaining journey through the cosmic gold rush that will, one way or another, define commerce—and life—on Earth for generations to come."—Atossa Araxia Abrahamian, author of The Cosmopolites: The Coming of the Global Citizen