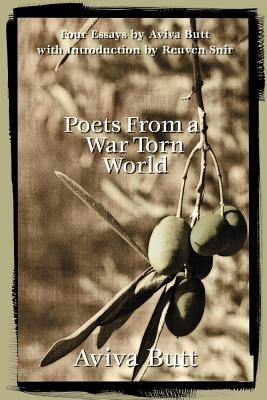 The first two essays in Poets from a War Torn World are about mysticism in modern Arabic poetry. The second two essays are about literary philosophy in modern Hebrew poetry. All four essays focus on the 1960s and 1970s, a time when poets hoped that through their writings they could help bring peace to a war torn Middle East. Reuven Snir's introduction is in clear simple language. It provides background knowledge that will assist the general reader who has no previous knowledge of specifically Arabic or Hebrew poetry. Otherwise, the introduction and essays are of interest to scholars, students and the general reader, those interested in poetry, poetics or diverse cultures. The four essays include Aviva Butt's translations of entire poems, so the book also includes a collection of poems that are enjoyable to read. The leading poets under discussion in the first three essays are Adunis (Adonis), Mahmud Darwish (Arabic poets) and Natan Zach (Hebrew poet). Rashid Husayn (Arabic poet) is also mentioned. The last essay, A Surge of Poetry, deals with the creativity of Hebrew poets Natan Zach, Yehuda Amichai, Meir Wieseltier and Asher Reich. Natan Alterman is also mentioned. Author of: Gifts from an Empty Suitcase and Other Short Stories: And Twenty Poems (2012) Publisher's website: http: //sbpra.com/AvivaButt

Aviva is currently publishing academic articles in a Turkish journal entitled The International Journal of Kurdish Studies (IJOKS) - Diyarbakir. Her articles on the Kurdish poet Salim Barakat are on the social media academia.edu

Aviva visited Diyarbakir Turkey over the holiday season, and is back in Tasmania Australia where she presently lives.