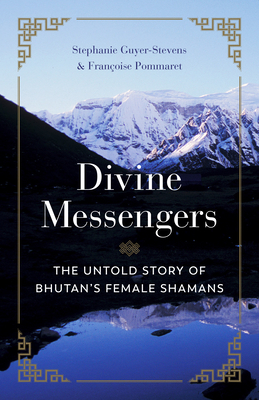 As mystics, healers, and travelers to the netherworld, female shamans continue to impact the spiritual lives of the Bhutanese. These divine messengers act as mediums for local spirits, cure diseases through prayer, and travel to the realm of the dead. They are sometimes referred to as “sky-goers,” “reincarnations,” or “returners from the beyond,” and their stories are intimately connected with the Buddhist ideas of karma and rebirth.

Journalist Stephanie Guyer-Stevens and anthropologist Françoise Pommaret traveled to the Himalayas to meet seven living Bhutanese female shamans and to help make their stories known. Stephanie and Françoise offer an intimate narrative of these shamans’ spiritual experiences and important roles in society. This book also provides an overview of the history of this tradition and a translation of an autobiography of the famous eighteenth-century divine messenger, Sangay Choezom. This insightful and sensitive account is a rare look inside the world of these brave women.

STEPHANIE GUYER-STEVENS is an award-winning journalist and executive producer of Outer Voices, a multimedia organization that focuses on women leaders from remote parts of the globe. In this capacity she has produced or co-produced nine radio documentaries, broadcast on American public radio stations and internationally, and produced dozens of features for NPR. Additionally she has produced numerous audio-centric multimedia presentations for exhibitions in across the world.

FRANCOISE POMMARET is a French anthropologist whose research focuses on Bhutan where she has worked since 1981 participating in tourism, educational, and cultural projects. She holds the position of Director of Research at the Centre national de la recherche scientifique (CNRS). Pommaret works as an adviser to the Institute of Language and Culture Studies (ILCS), Royal University of Bhutan, has been a consultant for UNESCO and is the author of Bhutan: Himalayan Mountain Kingdom and Lhasa in the Seventeenth Century: The Capital of the Dalai Lamas.

“This beautiful book celebrates those rarest of women in Bhutan, powerful mediums who employ multiple techniques of ecstasy to soar away on the wings of trance to distant metaphysical realms where they can work their deeds of medical, mystical, and magical rescue. They are the living embodiment of a tradition in which actual communication with spirits is the norm, an ongoing dialogue essential to the maintenance of peace and harmony between humans and the divine.”—Wade Davis, author of Into the Silence: The Great War, Mallory, and the Conquest of Everest

“An insightful study of the delom, or ‘returner from the dead,’ this book captures the fascinating stories of intermediaries between the human and hell realms. It unravels the dying culture that coalesces Himalayan shaman practice with Buddhist cosmology and eschatology.”—Karma Phuntsho, author of The History of Bhutan

“Stephanie Guyer-Stevens and Françoise Pommaret are subtle and receptive guides who bring their encounters with female shamans to life in evocative detail. They make you feel as if you’re there with them, privileged to experience a fascinating practice that’s so little known or understood in the West.”—Cathy Fitzgerald, radio producer and documentary-maker for the BBC

“I love and admire the book and the great work both Françoise and Stephanie did in tracking down and relating with all the khandroms and deloms and divine messengers all over Bhutan, and the clear and sensitive thought and writing that went into the fascinating book . . . Just amazing.”—Robert Thurman

“Those interested in the relationships between Buddhism and shamanism will relish this eye-opening account.”—Publishers Weekly