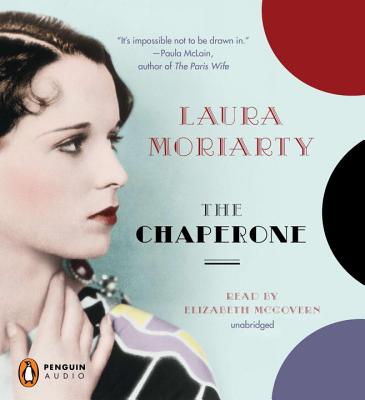 By Laura Moriarty, McGovern Elizabeth (Read by)
$39.95
Email or call for price

“Silent film star Louise Brooks was accustomed to being the center of attention, but that is not the case in this exquisite novel about the summer of 1922 when 15-year-old Louise traveled to New York for dance training. At the center of this story is her chaperone, 36-year-old Cora Carlisle, who has reasons of her own for traveling to New York that fateful summer. Cora's story is one of casting after the classic American dream with a few unexpected twists, and Moriarty's writing captures it perfectly.”
— Katherine Osborne, Kennebooks, Kennebunk, ME

Soon to be a feature film from the creators of Downton Abbey starring Elizabeth McGovern, The Chaperone is a New York Times-bestselling novel about the woman who chaperoned an irreverent Louise Brooks to New York City in the 1920s and the summer that would change them both. Only a few years before becoming a famous silent-film star and an icon of her generation, a fifteen-year-old Louise Brooks leaves Wichita, Kansas, to study with the prestigious Denishawn School of Dancing in New York. Much to her annoyance, she is accompanied by a thirty-six-year-old chaperone, who is neither mother nor friend. Cora Carlisle, a complicated but traditional woman with her own reasons for making the trip, has no idea what she's in for. Young Louise, already stunningly beautiful and sporting her famous black bob with blunt bangs, is known for her arrogance and her lack of respect for convention. Ultimately, the five weeks they spend together will transform their lives forever. For Cora, the city holds the promise of discovery that might answer the question at the core of her being, and even as she does her best to watch over Louise in this strange and bustling place she embarks on a mission of her own. And while what she finds isn't what she anticipated, she is liberated in a way she could not have imagined. Over the course of Cora's relationship with Louise, her eyes are opened to the promise of the twentieth century and a new understanding of the possibilities for being fully alive. Drawing on the rich history of the 1920s, '30s, and beyond--from the orphan trains to Prohibition, flappers, and the onset of the Great Depression to the burgeoning movement for equal rights and new opportunities for women--Laura Moriarty's The Chaperone illustrates how rapidly everything, from fashion and hemlines to values and attitudes, was changing at this time and what a vast difference it all made for Louise Brooks, Cora Carlisle, and others like them.

Laura Moriarty is the author of The Center of Everything, The Rest of Her Life, and While I'm Falling. She lives in Lawrence, Kansas.