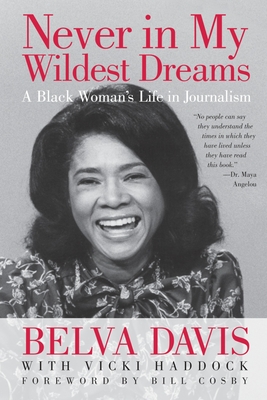 As the first black female television journalist in the western United States, Belva Davis overcame the obstacles of racism and sexism, and helped change the face and focus of television news. Now she is sharing the story of her extraordinary life in her poignantly honest memoir, Never in My Wildest Dreams. A reporter for almost five decades, Davis is no stranger to adversity. Born to a fifteen-year-old Louisiana laundress during the Great Depression, and raised in the overcrowded projects of Oakland, California, Davis suffered abuse, battled rejection, and persevered to achieve a career beyond her imagination. Davis has seen the world change in ways she never could have envisioned, from being verbally and physically attacked while reporting on the 1964 Republican National Convention in San Francisco to witnessing the historic election of Barack Obama in 2008.

Davis worked her way up to reporting on many of the most explosive stories of recent times, including the Vietnam War protests, the rise and fall of the Black Panthers, the Peoples Temple cult mass suicides at Jonestown, the assassinations of San Francisco Mayor George Moscone and Supervisor Harvey Milk, the onset of the AIDS epidemic, and the aftermath of the terrorist attacks that first put Osama bin Laden on the FBI’s Most Wanted List. She encountered a cavalcade of cultural icons: Malcolm X, Frank Sinatra, James Brown, Ronald Reagan, Huey Newton, Muhammad Ali, Alex Haley, Fidel Castro, Dianne Feinstein, Condoleezza Rice, and others.

Throughout her career Davis soldiered in the trenches in the battle for racial equality and brought stories of black Americans out of the shadows and into the light of day. Still active in her seventies, Davis, the “Walter Cronkite of the Bay Area,” now hosts a weekly news roundtable and special reports at KQED, one of the nation’s leading PBS stations,. In this way she has remained relevant and engaged in the stories of today, while offering her anecdote-rich perspective on the decades that have shaped us.

Belva Davis currently hosts This Week in Northern California on San Francisco’s KQED. She has received eight local Emmys and many other awards, including honors from the International Women’s Media Foundation and the National Association of Black Journalists.
Vicki Haddock is a journalist and was a senior writer at the San Francisco Chronicle as well as a reporter and assistant city desk editor for the San Francisco Examiner.

“I was not asked to write a blurb for Up From Slavery, War and Peace, or The Fire Next Time, but gladly I can say Never in My Wildest Dreams is a very important book. No people can say they understand the times in which they have lived unless they have read this book.”
—Dr. Maya Angelou

“Belva Davis has lived this country’s history as only a brave black woman could and has witnessed it as a journalist with a world-class head and heart. I don’t think it’s possible for anyone to read her words without becoming a better and braver person.”
—Gloria Steinem

“Never in My Wildest Dreams shows what it really takes to succeed as a black woman in the journalistic world in America. A must read.”
—Willie L. Brown, Jr., Chairman and CEO, Willie L. Brown Institute and former Mayor of San Francisco

"This fascinating book is a must-read for all and a welcome addition to the history of journalism."
—American Journalism

“After a friendship of over thirty years, it’s astonishing to find from this reveal- ing, heartbreaking, and inspirational book that I knew so little about the pro- found and historic forces that shaped Belva’s life.”
—Phil Bronstein, Editor-at-Large, Hearst Newspapers

“An engaging memoir that includes not only a fascinating childhood and com- ing-of-age in the deep south and the Oakland projects, but also involvement in some of the most important happenings of the mid-20th century.”
—School Library Journal

“The remarkable odyssey of Belva Davis is a compelling testament to tenacity and truth. As a pioneering black journalist, she was determined to tell the sto- ries that mainstream news outlets had ignored for too long—and she devoted her career to ensuring that the voices of all Americans became part of our na- tional conversation. This fiercely honest memoir reveals that her struggle was never easy, but helping change the world never is.”
—Andrew Young, Former Ambassador to the United Nations, Chairman of GoodWorks International, LLC

“Risk-averse people do not make good journalists. Belva Davis entered the pro- fession during the 1960s when virtually every good story required risk-taking. Belva has lived on the edge of history over the last fifty years in some of its most dangerous places. And she got the stories, including her own. Never in My Wildest Dreams is the chronicle of her march through the second half of the twentieth century as a great black woman journalist.”
—Howard Dodson, Director of the Schomburg Center for Research in Black Culture

“Good writing is a combination of two things: good thoughts and good prose. Belva Davis tops that. She gives us tough journalism clothed in the tender lyri- cism of a true poet who journeys to the depth of the human heart.”
—Abigail Rosen McGrath, Founder of Renaissance House

“An engrossing account of triumph over adversity. Never in My Wildest Dreams is a valuable contribution to the pre- and post-WWII history of blacks in the Bay Area and a fascinating exploration of the determination that carried Belva Davis far beyond her impoverished childhood and local reporting work to the ranks of the nation’s most respected journalists.”
—Jewelle Taylor Gibbs, Professor Emerita, University of California at Berkeley

"She clawed her way into the white male-dominated news industry, climbing her way up despite the most unlikely of profiles: black, female, short of stature, equipped with a soft voice and no college degree, for years herself a single mother.....As a woman and an African-American, Davis said she always felt the pressures of blazing a trail for others. She constantly worked to master her emotions, in order to present the public face of the consummate professional newswoman— confident, imperturbable and scrupulously objective. Inside, she was afflicted by hurts and humiliations, fears and anxieties that she could never let show....Her memoir, written with political journalist Vicki Haddock, is both a personal narrative and a modern political history of the Bay Area, California and, at times, the nation."
—Jerry Roberts , Calbuzz.com


“With the publication of her new memoir, groundbreaking San  Francisco-based journalist Belva Davis takes us on an awe-inspiring personal  journey that navigates the upheavals that have reshaped broadcasting, race and  politics in America.”
—Carla Marinucci, political reporter, San Francisco Chronicle

"With bracing candor, Belva Davis shares the story of her extraordinary, gutsy, against-all-odds journey from a poor chaotic upbringing in Louisiana, through the pioneering days of TV journalism, to the respected position she occupies today. Meet a truly remarkable woman."
—Judy  Woodruff, coanchor, The PBS NewsHour