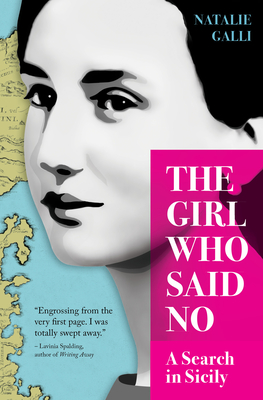 By Natalie Galli
$16.99
Email or call for price

An eighteen-year-old woman named Franca Viola made history in 1966 as one of the first "#metoo" heroines of modern times, when she refused to go along with a centuries-old forcible marriage custom in Sicily. Having endured kidnap and rape, she publicly defied the expectation that she would marry the rapist to "restore her broken honor." A social uproar occurred throughout the island ― and beyond.

In Natalie Galli's The Girl Who Said No, Viola's remarkable story unfolds when the author arrives in Palermo to search for this brave heroine, with little more than the memory of a tiny article she had spotted two decades prior. Galli wanted to know: whatever had become of this courageous girl who had overturned an ancient, entrenched tradition?

The riveting events after Franca pressed charges with the police form the core of this gripping memoir. Viola was subjected to public taunting whenever she appeared on the streets of her town; Mafia-orchestrated bullying threatened her entire family. Galli traced the dramatic tale to its conclusion, in spite of initial warnings from her own relatives not to break the Sicilian code of silence.

Throughout her search for the enigmatic Franca, Galli shares her own poignant and hilarious observations about a vibrant culture steeped in contradictions and paradoxes. Does she succeed in locating the elusive proto-feminist whose case forever changed Italian culture and history? Travel along on Galli's engaging odyssey to find out.

Natalie Galli, a San Francisco native of Italian background, has penned two illustrated children's books for Sunbath Studios: Ciao Meow and Spin The Hound Lost and Found, A Tale of the 1906 San Francisco Earthquake. She edited a third Sunbath Studios publication: LeeLee The Lizard Wants A Pizza. Her writings have been anthologized in Italy, A Love Story and in four volumes of Travelers' Tales, three of which were awarded gold and silver prizes by the Bay Area Travel Writers. She has worked as an editor and proofreader for Burning Books, as a columnist for The Berkeley Monthly, and as a freelance contributor to the San Francisco Chronicle. She lives in the San Francisco Bay Area.