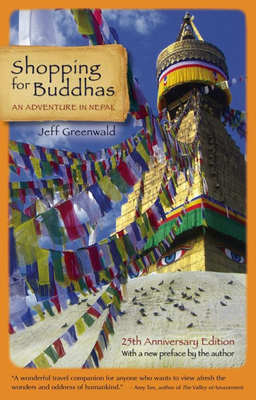 Jeff Greenwald's classic travelogue follows his quest for the perfect Buddha statue. At turns hilarious and moving, his quest features a cast of amazing characters -- from a passionate palmist to a flying lama -- who provide unforgettable glimpses into the daily life and culture of the former kingdom (including a wild ride on Kathmandu's very first escalator). Greenwald doesn't shy away from Shangri-la's darker side. Along with colorful descriptions of Hindu and Buddhist mythology, the book tells of the rampant corruption, art smuggling, assassination attempts and human right abuses that would ignite Nepal's violent People Power Revolution in April 1990. A new afterword by the author recounts Nepal's tumultuous recent history -- including the massacre of the royal family -- in vivid detail. And a new preface introduces this 25th anniversary edition with some thoughts about how Nepal, and travel writing, have evolved since the book's first publication. Shopping for Buddhas remains a must-read for anyone who has visited, or plans to visit, Nepal.

Jeff Greenwald is a writer, photographer, and performer. He is the author of six books, including The Size of the World, for which he created the first Internet travel blog. His work has appeared in Wired, Salon, Smithsonian, Afar, The New York Times Magazine, and many other publications. Jeff serves as the executive director of the nonprofit Ethical Traveler. He has also created a critically acclaimed solo show, Strange Travel Suggestions, which draws from his tales as a travel journalist. Jeff's most recent book, Snake Lake, is set during Nepal's 1990 Democracy revolution. He lives in Oakland, CA.