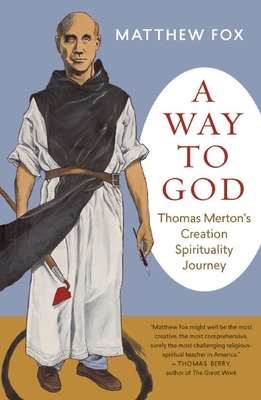 This powerful book was prompted by an invitation Matthew Fox received to speak on the centennial of Thomas Merton's birth. Fox says that much of the trouble he's gotten into -- such as being expelled from the Dominican Order in 1993, after thirty-four years, by Cardinal Ratzinger (who later became Pope Benedict) -- was because of Merton, who prompted Fox to attend the Institut Catholique in Paris to undertake a doctoral program in spirituality. Fox reimmersed himself in Merton's journals, poetry, and religious writings, finding that Merton's marriage of mysticism and prophecy, contemplation and action closely paralleled that of Meister Eckhart, the thirteenth-century mystic who inspired Fox's own Creation Spirituality. In A Way to God, Fox explores Merton's pioneering work in interfaith, his essential teachings on mixing contemplation and action, and how the vision of Meister Eckhart profoundly influenced Merton in what Fox calls his Creation Spirituality journey.

Matthew Fox is an internationally acclaimed theologian and spiritual maverick who has spent the past forty years revolutionizing Christian theology, taking on patriarchal religion, and advocating for a creation-centered spirituality of compassion, justice, and resacralizing of the earth. Originally a Catholic priest, Fox was silenced for a year and then expelled from the Dominican Order by Cardinal Ratzinger for teaching liberation theology and Creation Spirituality. Fox currently serves as an Episcopal priest, having received what he calls "religious asylum" from the Episcopal Church. With exciting results, he has worked with young people to create the Cosmic Mass to revitalize worship by bringing elements of rave and other postmodern art forms to the Western liturgical tradition. He has written more than thirty books, which have sold over 1.5 million copies in sixty languages. He lives in Oakland, CA.