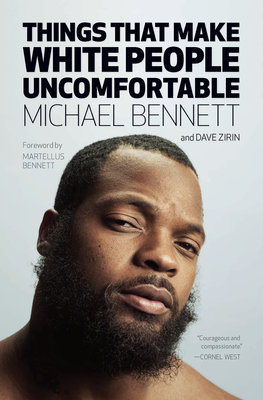 A version for Young Adults is also available.

Michael Bennett is a Super Bowl Champion, a three-time Pro Bowl defensive end, a fearless activist, a feminist, a grassroots philanthropist, an organizer, and a change maker. He's also one of the most scathingly humorous athletes on the planet, and he wants to make you uncomfortable.

Bennett adds his unmistakable voice to discussions of racism and police violence, Black athletes and their relationship to powerful institutions like the NCAA and the NFL, the role of protest in history, and the responsibilities of athletes as role models to speak out against injustice. Following in the footsteps of activist-athletes from Muhammad Ali to Colin Kaepernick, Bennett demonstrates his outspoken leadership both on and off the field.

Written with award-winning sportswriter and author Dave Zirin, Things that Make White People Uncomfortable is a sports book for our turbulent times, a memoir, and a manifesto as hilarious and engaging as it is illuminating.

Michael Bennett is a three-time Pro Bowler, Pro Bowl MVP, Super Bowl Champion, and two-time NFC Champion. He has gained international recognition for his public support for the Black Lives Matter Movement, women's rights, and other social justice causes. In 2017, he was named one of the 100 Most Influential African Americans by The Root, was the Seattle Seahawks nominee for the NFL's Walter Payton Man of the Year award, and was honored along with his brother Martellus with a BET Shine a Light award for exceptional service. He is the cofounder with Pele Bennett of The Bennett Foundation, which educates underserved children and communities through free, accessible programming. He has held free camps and health clinics in Seattle, in his hometown of Houston, in his current offseason home, Honolulu, and in South Dakota on the Lower Brule Sioux Tribe. He donates all of his endorsement money and the proceeds from his jersey sales to fund health and education projects for poor and underserved youth and minority communities, and recently expanded his reach globally to support STEM programming in Africa. He is the proud father of three daughters, Peyton, Blake, and Ollie. Dave Zirin is the sports editor for the Nation and the author of several books, most recently Brazil's Dance with the Devil. Named one of UTNE Reader's "Fifty Visionaries Who Are Changing Our World," Zirin is a frequent guest on MSNBC, ESPN, and Democracy Now! He hosts WPFW's The Collision with Etan Thomas and has been called the best sportswriter in the United States, by Robert Lipsyte.