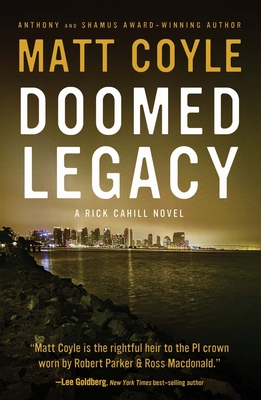 This is book number 9 in the The Rick Cahill Series series.

A sinister private detective agency, a shady shell corporation, and a dead friend—Rick Cahill is on his most dangerous mission yet

Private investigator Rick Cahill has been running from his past and chasing the truth his whole life. But his past is relentless—and so is his CTE, a disease caused by repeated head traumas that has attacked his body and his mind. As his CTE progresses, he realizes that the disease not only threatens his life but also endangers his family’s wellbeing.

As Rick struggles to keep his family together, he does a favor for Sara Bhandari, a business contact. Then, Sara is murdered, and the police believe her to be yet another victim of a serial rapist who has been terrorizing greater San Diego. But Rick has reason to question their theory. Determined to find the truth at any cost, and against his wife’s warnings, he investigates on his own.

Along the way, he bumps up against a sinister private investigative agency and a shady shell corporation that may be hiding more than company secrets. As Rick digs for the truth about Sara’s death, he risks his own life and the lives of countless innocents caught in his relentless crusade. Ultimately, Rick must decide if his quest is worth the risk of losing his family forever.

Perfect for fans of Michael Connelly and John Sandford

While all of the novels in the Rick Cahill PI Crime Series stand on their own and can be read in any order, the publication sequence is:

Matt Coyle is the best-selling author of the Rick Cahill PI Crime Series. He was named the 2021 San Diego Writer’ s Festival Mystery Writer of the Year, and his novels have won the Anthony Award, the Shamus Award, the Lefty Award, the San Diego Book Award, among others. He has also received nominations for numerous Anthony, Macavity, Shamus, and Lefty Awards. Doomed Legacy is the ninth in this award-winning series. Matt is a graduate of UC Santa Barbara and lives in San Diego.

“Award-winning Matt Coyle has done it again. This series is a must-read for me. He’s at the top of his game with Doomed Legacy—a great, fast-paced story, full of danger and surprise.” —Deadly Pleasures Mystery Magazine

“Matt Coyle is on a roll. Doomed Legacy has all the best of a classic PI novel delivered with the pacing of a thriller. A man driven by discovering the truth no matter the cost, Rick Cahill is the type of human you’d want on your side when things go badly, and his dogged, and at times reckless, pursuit of justice makes for fabulous fiction.” —Danielle Girard, USA Today best-selling author

“With Wrong Light, Matt Coyle is on top of his game and Rick Cahill ascends to the top ranks of the classic private eyes. Coyle knows the secret: digging into a crime means digging into the past. Sometimes it’s messy, sometimes it’s dangerous—always it’s entertaining. You’ll find all of that and more in this great read.” —Michael Connelly, New York Times best-selling author

“Matt Coyle knocks it out of the park with Last Redemption. Just when you think Coyle has reached the top of his game—he does one better.” —Allison Brennan, New York Times best-selling author

“Matt Coyle is one of the finest PI authors in the business. Last Redemption proves it. Superb!” —Bruce Robert Coffin, award-winning author of the Detective Byron Mysteries

“Sharp, suspenseful, and poignant, Lost Tomorrows hits like a breaking wave and pulls readers into its relentless undertow. Matt Coyle is at the top of his game.” —Meg Gardiner, Edgar Award-winning author

“Award-winning Matt Coyle has done it again. This series is a must-read for me. He’s at the top of his game with Doomed Legacy—a great, fast-paced story, full of danger and surprise.” —Deadly Pleasures Mystery Magazine

“The ending is a symphony of rage and violence—and some darned good one-liners.” —Booklist

“Last Redemption deserves more stars than has the Hollywood Walk of Fame.” —Bookreporter