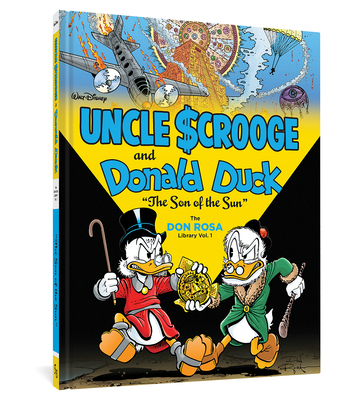 This is book number 1 in the The Don Rosa Library series.

“Great howling crashwagons!” The Richest Duck in the World is back—and so are noisy nephew Donald, wunderkinder Huey, Dewey, and Louie, and rascally richnik Flintheart Glomgold! Because you asked for it, we’re proud to present our first complete, chronological book of Duck adventures by modern fan favorite Don Rosa—following in the footsteps of Disney legend Carl Barks with an exciting, lovingly detailed style all his own!

Rosa, among the world’s most beloved modern cartoonists, launched his Barksian career in 1987. Famed for his prizewinning “Life and Times of Scrooge McDuck” (Will Eisner Comic Industry Award, 1995: Best Serialized Story), Rosa wrote and drew a whopping two decades’ worth of ripping Scrooge and Donald yarns!

Standout stories in our first Uncle Scrooge and Donald Duck book include “The Son of the Sun,” Scrooge’s and Flintheart’s epic battle for Inca gold; “Crocodile Collector,” Donald’s pursuit of a roguish rare reptile; and “Last Sled to Dawson,” Rosa’s sequel to Barks’ classic “Back to the Klondike”—featuring the return of Scrooge’s old flame, Glittering Goldie O’Gilt! Uhoh... “Cash Flow” brings back the Beagle Boys, too!

Presented with sparkling color and a rich archive of Rosa’s cover art and behind-the-scenes factoids, these Duckburg epics are getting a definitive, comprehensive North American edition for the very first time—at a bargain price worthy of Scrooge himself!

First active in comics as the indie creator of Captain Kentucky and The Pertwillaby Papers, Don Rosa (b. June 29, 1951) made his jump to official Scrooge sagas with the launch of Gladstone Publishing, the watershed 1980s publisher of fan-friendly Disney comics titles. Rosa later switched to producing Duckburg comics for the pan-European publisher Egmont, leading to his capturing a remarkable international fandom. He lives near Louisville, KY.

...[I]t looks great, and the new volumes of the Rosa library should prove perfect companion volumes for those in the Barks library, particularly for readers who find their appetites for these types of duck tales whetted by the Barks books. …Rosa’s Duck comics? They’re great ones.
— J. Caleb Mozzocco - School Library Journal

The work itself remains essential: More than 'just' a Barks homage, Rosa carried the Good Duck Artist’s legacy into legitimately new territory, exposing and massaging the pathos and wicked humor at the core of every good nostalgic exercise.
— Tim O'Neil - The A.V. Club

In this first volume, it collects for the first time ever Rosa’s first Uncle Scrooge comics in chronological order, and man are they pretty.

…Rosa is so sincere in his desire to revive Barks's style of adventure and humor it shows in every panel, every detail of his work. He's taking this seriously, folks, and its all there. … Good stuff, sez I.
— Jerry Beck - Cartoon Research

This series promises to be one of the best ever collections of a single creator's work, a self-aware treatise and the ultimate in historical detail. …  It's a joy to know that a series like this exists and that I'll be able to own it all in the coming years.
— Augie de Blieck Jr. - Comic Book Resources

On the short list of comic book creators responsible for genuine masterpieces of the medium, Don Rosa‘s name is pretty darn close to the top. ... In his time on the Ducks, Rosa was responsible for over 80 stories that include some of the best comics of all time...
— Chris Sims - ComicsAlliance

In the handsome reprints of Uncle Scrooge and Donald Duck: The Don Rosa Library, ...cartooning journeyman genius Rosa displays his penchant for turning out issue after issue of globetrotting adventures… The work is more than deserving of a collection centered on the work of a funnybooks auteur…

Rosa's comics may be the best comics ever done in the voice of another creator. They're very funny, satisfying yarns, and this presentation -- particularly the color -- is super-handsome. This would have been my favorite book ever at eight years old, and I'm fond of it now.
— Tom Spurgeon - The Comics Reporter