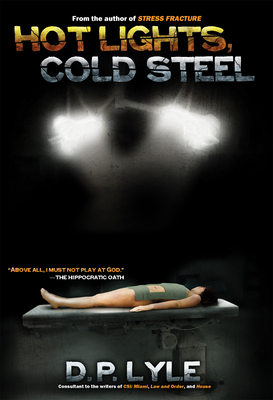 This is book number 2 in the Dub Walker series.

Forensic criminalist Dub Walker is once again called upon when an old friend enlists his help in finding her 19-year-old daughter. When the bodies of two young women show up in a shallow grave, one of whom is the daughter, Dub is back to work and hard at it. Soon other bodies start turning up in similar graves, and each victim has undergone multiple, highly technical surgical procedures requiring extremely sophisticated equipment. Who would have access to such state-of-the-art instruments and the skill to perform the complex surgeries? The ensuing trail of terror and bodies that leads Dub to Talbert Biomedical--a surgical instrument manufacturing company operated by a business tycoon and a surgeon--is a horrifying breech of ethics and human decency. It's too gruesome to even contemplate what was done to the victims before they died. To catch a killer, Dub has to put himself in their place.

D. P. Lyle is a cardiologist, a writer, and a story and technical consultant for several popular television shows, including "1-800-Missing," "Cold Case," "CSI: Miami," "Diagnosis""Murder," "House," "Judging Amy," "Law & Order," "Medium," "Monk," and "Peacemakers." He is the author of "Devil's Playground," "Double Blind," and "Stress Fracture" as well as the Edgar Award-nominated "Forensics for Dummies" and the Macavity Award-winning "Murder and Mayhem."""He lives in Lake Forest, California.