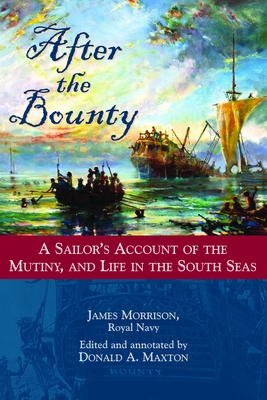 This event, however, only introduces Morrison’s remarkable journey through the South Seas. A born storyteller, Morrison pens compelling tales of the time after the mutiny, beginning with ringleader Fletcher Christian’s two ill-fated attempts to establish a refuge on the island of Tubuai. Morrison then recounts his eighteen-month sojourn on Tahiti, where he constructed a seaworthy schooner and closely observed the island and its way of life. He tells of the subsequent arrival of HMS Pandora, which was charged with bringing the mutineers back to England for trial, and his imprisonment in the horrific “Pandora’s Box.” Morrison once again faces peril when the Pandora sinks on Australia’s Great Barrier Reef, where thirty-one of the crew and four prisoners perished.

Although Morrison did not actively participate in the Bounty insurrection, he had remained with Fletcher Christian’s party, which was enough evidence for his eventual condemnation. While imprisoned, Morrison began composing his journal. King George III granted a pardon, and soon after his release, Morrison wrote the second half of the journal, which he filled with detailed descriptions of Tahitian life, culture, and natural history. Morrison’s journal is an invaluable resource for naval and cultural historians and an enthralling tale for the general reader.

Donald A. Maxton worked in the field of corporate communications and public affairs for thirty-five years. He is the author of The Mutiny on H.M.S. Bounty: A Guide to Nonfiction, Fiction, Poetry, Films, Articles, and Music and Chasing the Bounty: The Voyages of Pandora and Matavy. He lives in New York City.

“For anyone interested in the Bounty saga, this volume is a most worthwhile addition to the extant nonfiction reading currently available.”—Sea History

“[This book] can be expected to add richly and pervasively to general knowledge of that historically and historiographically conspicuous incident.”—Mariner’s Mirror

“Editor Maxton . . . has done an excellent job in preparing Morrison’s works for publication, and supplemented them with a valuable commentary, which makes After the Bounty a good read for anyone interested in life at sea in the age of sail or the history and culture of the South Seas.”—strategypage.com

“It’s a curiously, entertaining and instructive for age-of-fighting-sail or Herman Melville enthusiasts.”—Naval Review

“[Morrison’s] stories of adventure after the Bounty mutiny makes for a powerful historical journal packed with nautical adventure and perfect for any nautical history library.”—Midwest Book Review