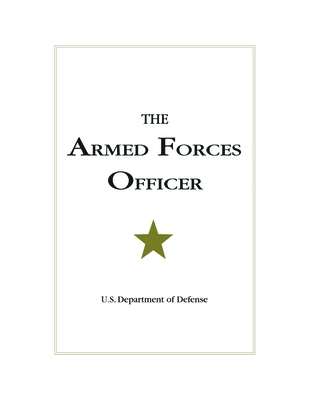 Initiated in 1950, this 2007 edition is the latest in a classic series of books of the same title. Journalist-historian S. L. A. Marshall wrote the first at the behest of Gen. George C. Marshall, who formed the great citizen army of World War II. The general believed officers of all services needed to base their professional commitment on a common moral-ethical grounding, which S. L. A. Marshall set out to explain. Ever since, these books have provided a foundation of thought, conduct, standards, and duty for American commissioned officers.

Available now to the general public, this new edition takes the series’ inspirational premise into the new century. It educates officers of all services, as well as civilians, about the fundamental moral-ethical requirements of being a commissioned officer in the armed forces of the United States. Understanding the common foundation of commissioned leadership and command of U.S. military forces is essential for achieving excellence in the joint operations of today’s combat environment. This philosophy unites the officers of the uniformed services in the common calling of supporting, defending, and upholding the Constitution in service to their country.

Faculty members of the four service academies and the Marine Corps University wrote The Armed Forces Officer. The Operational Plans and Joint Force Development Directorate (J-7), Joint Education and Doctrine Division, of the U.S. Department of Defense coordinated and sponsored the work.

“I encourage you to reflect on the timeless themes outlined in this book and consider what honor, integrity, selflessness, commitment, and the greater good mean to you. They define the ethos of our profession of arms, a philosophy that has moral leadership at its core.”—from the Foreword by Gen. Peter Pace, USMC, Chairman of the Joint Chiefs of Staff


“The indomitable spirit of the thousands of wounded, men and women, regulars and reservists, fighting to remain on active duty in spite of their wounds, is ample evidence of the well-being of the institutional soul of today's armed forces, its men and women of all ranks. It is into the hands of armed forces officers that the leadership of these men and women is entrusted by the American people, through their elected representatives and government. This book is a modest effort to explain the nature of that trust and the obligations and expectations in entails.”—from the Foreword by the Hon. Ike Skelton, ranking member of the House Armed Services Committee