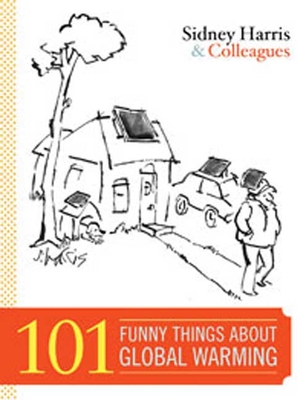 From Sidney Harris, a long-time New Yorker, American Scientist, and Hippocrates magazine cartoonist, comes a hilarious and thought-provoking collection of 100 original cartoons on the earth's changing climate and environment.

Not a day goes by without word about our impending environmental doom. If it's not the polar ice caps melting at an even more alarming rate than originally thought, it's the sudden--and totally unexplained-- disappearance of bees. It's enough to make even the most ardent of anti-environmentalists throw their arms up in despair. So, what are we supposed to do between now and when lower Manhattan is13-feet below sea level? Well, in 100 Funny Things About Global Warming, acclaimed cartoonist Sidney Harris suggests looking at the sunnier-side of global warming. In collaboration with an assortment of his New Yorker colleagues, Harris makes light of hot-button environmental issues, like unreliable Hybrid cars, pie-in-the-sky alternative energy sources, head-in-the-sand politicians, and the existential crisis of our own biodegradable nature. Provocative, timely, and endlessly funny, 100 Funny Things About Global Warming is an unexpected look at today's inconvenient truths by this generation's most celebrated cartoonists.

Sidney Harris is America's foremost science cartoonist. His illustrations have appeared in innumerable magazines, books, newsletters, ads and web sites, including American Scientist, which has published more than 600 of his cartoons, Science, Discover, Physics Today, The New Yorker, The Wall Street Journal, Harvard Business, and National Lampoon. In addition, twelve collections of his cartoons have been published including From Ads to Cloning Labs, You Want Proof - I'll Give You Proof, Stress Test, All Ends Up, and What's So Funny About Science.

“…a hysterical collection of original cartoons that turn the melting polar ice caps into a laughing matter.  As funny as they are thought-provoking, these comics prove that the best humor isn’t black—it’s green.”  —ZINK magazine

“Great comedy can make you laugh and open your mind at the same time, and 101 Funny Things About Global Warming succeeds at both.” —Global Warming Activist and Producer Laurie David