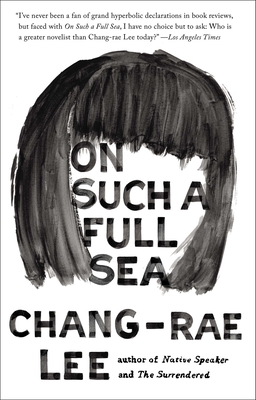 “Watching a talented writer take a risk is one of the pleasures of devoted reading, and On Such a Full Sea provides all that and more. . . . With On Such a Full Sea, [Chang-rae Lee] has found a new way to explore his old preoccupation: the oft-told tale of the desperate, betraying, lonely human heart.”—Andrew Sean Greer, The New York Times Book Review

“I've never been a fan of grand hyperbolic declarations in book reviews, but faced with On Such a Full Sea, I have no choice but to ask: Who is a greater novelist than Chang-rae Lee today?”—Porochista Khakpour, The Los Angeles Times

From the beloved award-winning author of Native Speaker,The Surrendered, and My Year Abroad, a highly provocative, deeply affecting story of one woman’s legendary quest in a shocking, future America.

On Such a Full Sea takes Chang-rae Lee’s elegance of prose, his masterly storytelling, and his long-standing interests in identity, culture, work, and love, and lifts them to a new plane. Stepping from the realistic and historical territories of his previous work, Lee brings us into a world created from scratch. Against a vividly imagined future America, Lee tells a stunning, surprising, and riveting story that will change the way readers think about the world they live in.

In a future, long-declining America, society is strictly stratified by class. Long-abandoned urban neighborhoods have been repurposed as highwalled, self-contained labor colonies. And the members of the labor class—descendants of those brought over en masse many years earlier from environmentally ruined provincial China—find purpose and identity in their work to provide pristine produce and fish to the small, elite, satellite charter villages that ring the labor settlement.

In this world lives Fan, a female fish-tank diver, who leaves her home in the B-Mor settlement (once known as Baltimore), when the man she loves mysteriously disappears. Fan’s journey to find him takes her out of the safety of B-Mor, through the anarchic Open Counties, where crime is rampant with scant governmental oversight, and to a faraway charter village, in a quest that will soon become legend to those she left behind.

Chang-rae Lee is the author of Native Speaker, winner of the Hemingway Foundation/PEN/Hemingway Award for first fiction; A Gesture Life; Aloft; and The Surrendered, winner of the Dayton Peace Prize and a finalist for the Pulitzer Prize. Selected by The New Yorker as one of the “20 Writers for the 21st Century,” Chang-rae Lee is Professor professor in the Lewis Center for the Arts at Princeton University and the a Shinhan Distinguished Visiting Professor at Yonsei University.

“Watching a talented writer take a risk is one of the pleasures of devoted reading, and On Such a Full Sea provides all that and more. . . . Lee has always been preoccupied by the themes of hope and betrayal, by the tensions that arise in small lives in the midst of great social change. His marvelous new book, which imagines a future after the breakdown of our own society takes on those concerns with his customary mastery of quiet detail—and a touch of the fantastic. . . . With On Such a Full Sea, he has found a new way to explore his old preoccupation: the oft-told tale of the desperate, betraying, lonely human heart.”—Andrew Sean Greer, The New York Times Book Review

“I've never been a fan of grand hyperbolic declarations in book reviews, but faced with On Such a Full Sea, I have no choice but to ask: Who is a greater novelist than Chang-rae Lee today?”—Porochista Khakpour, The Los Angeles Times

“In his latest and boldest novel, On Such a Full Sea, Lee’s characters are Chinese immigrant workers in the United States—specifically Chinese workers from a long-elapsed China toiling in a fast-declining America a century or so from now. For Lee’s heroine, Fan, the issue is not acclimatization but self-discovery. The adventures of this feisty yet wary protagonist, together with a bleak but arresting vision of the future, keep the reader rapt and concerned for the fate of both beleaguered character and battered brave new world.”—Minneapolis Star Tribune

“Now with On Such a Full Sea, one of our most silken storytellers, Chang-rae Lee, has imagined how it all goes wrong in the darkest installment of this literary night terror yet. The menace of Lee’s book derives from how closely it resembles reality. The haves and have-nots in his world are neatly balkanized. Cities produce, suburbs consume, and only the rich can afford the health care that keeps them alive. . . . With this strange and magically grim book, Chang-rae Lee has allowed us to leave the familiar behind, all so we can see it more clearly.”—The Boston Globe

“[On Such a Full Sea is] not just a fully realized, time-jumping narrative of an audacious young girl in search of lost loved ones, but an exploration of the meaning and function of narrative, of illusion and delusion, of engineered personalities and faint promises of personhood, and of one powerful nation's disappearance and how that indelibly affects another.”—Chicago Tribune

"The most striking dystopian novels sound an alarm, focus our attention and even change the language. The Handmaid’s Tale crystallized our fears about reproductive control; Fahrenheit 451 still flames discussions of censorship; and 1984 is the lens through which we watch the Obama administration watching us. Chang-rae Lee’s unsettling new novel, On Such a Full Sea, arrives from that same frightening realm of total oversight and pinched individuality. . . . A brilliant, deeply unnerving portrait."—The Washington Post

"Should every talented novelist have a go at dystopia? Probably not, but we can thank the gods of chaos that the trendy genre fell into the hands of Chang-rae Lee. Over four novels, Lee has mastered the art of lyrical realist portraiture, breathing life into immigrants at sea in modern America. Taking a bold turn with his fifth, On Such a Full Sea, he's equally deft at envisioning a failed America. . . . As Fan's wild journey takes her across the socioeconomic strata, Lee's novel brilliantly satisfies the genre's prime directive, which is to reveal the awful present by means of the terrible future."—GQ

"[The] haunting On Such a Full Sea . . . recalls the work of Cormac McCarthy and Kazuo Ishiguro. Here Lee weaves multiple plots into an ambitious epic showcasing a fearless fish-tank-diver heroine as she treks across a devastated landscape. . . . With its appealing protagonist as narrative glue, On Such a Full Sea layers stories within stories, building to its final, resonant catharsis."—O, The Oprah Magazine

"Chang-rae Lee . . . is best known for realistic fiction about displaced characters of Asian descent. He sets his latest work, On Such a Full Sea, in a chaotic, dystopian America, but I'm happy to report that at its heart it's still very much another deeply soulful Chang-rae Lee novel. . . . The dystopia of On Such a Full Sea isn't showy. As in Kazuo Ishiguro's Never Let Me Go, there's a welcome absence of sterile white laboratories and grand displays of oppression. instead Lee relies on specific, indelible images—a family of toothless acrobats who feed humans to their dogs, a group of anime-eyed girls held captive in a wealthy Charter woman's home—and his usual perceptive writing to get at the warped morality that can drive a world into decline."—Entertainment Weekly

“Chang-rae Lee’s On Such A Full Sea is so elegiac that it almost collapses into a morass of sorrow, yet it’s so well crafted it’s impossible not to see the story to its end. With his latest novel, Lee creates a world far into the future, where the boundaries between countries have frayed and a semi-dystopian state has arisen. Although Orwellian themes linger in the background, the book itself is really about one woman, and the symbol she becomes to the village she leaves behind.”—A.V. Club (A)

"Lee's prose is sumptuous and at dimes discursive, and for that reason, this is a novel that demands the reader's full engagement. The rewards for that commitment are considerable; On Such a Full Sea is an elegiac and often unsettling glimpse of a future that could be closer than we'd like to think."—Bookpage

"It's an engrossing read, and Lee's skills as a world builder of the finest order are evident in every chapter."—Publishers Weekly (starred review)

“Lee, always entrancing and delving, takes a truly radical leap in this wrenching yet poetic, philosophical, even mystical speculative odyssey. . . . Lee brilliantly and wisely dramatizes class stratification and social disintegration, deprivation and sustenance both physical and psychic, reflecting, with rare acuity, on the evolution of legends and how, in the most hellish of circumstances, we rediscover the solace of art. Electrifying.”—Booklist (starred review)

“The title alone is an astonishing feat of encapsulated genius from the inimitable Lee. . . . Brilliant . . . A heart-thumping adventure.”—Library Journal (starred review)

"A harrowing and fully imagined vision of dystopian America from Lee. . . . The potency and strangeness of [his]characters never diminish the sense that Lee has written an allegory of our current predicaments, and the narration, written in the collective voice of B-Mor, gives the novel the tone of a timeless and cautionary fable. Welcome and surprising proof that there’s plenty of life in end-of-the-world storytelling."—Kirkus (starred review)