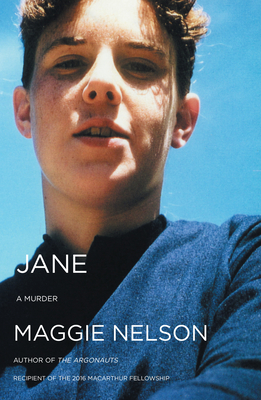 Part elegy, part true crime story, this memoir-in-verse from the author of the award-winning The Argonauts expands the notion of how we tell stories and what form those stories take through the story of a murdered woman and the mystery surrounding her last hours.

Jane tells the spectral story of the life and death of Maggie Nelson’s aunt Jane, who was murdered in 1969 while a first-year law student at the University of Michigan. Though officially unsolved, Jane’s murder was apparently the third in a series of seven brutal rape-murders in the area between 1967 and 1969. Nelson was born a few years after Jane’s death, and the narrative is suffused with the long shadow her murder cast over both the family and her psyche.

Exploring the nature of this haunting incident via a collage of poetry, prose, dream-accounts, and documentary sources, including local and national newspapers, related “true crime” books such as The Michigan Murders and Killer Among Us, and fragments from Jane’s own diaries written when she was 13 and 21, its eight sections cover Jane’s childhood and early adulthood, her murder and its investigation, the direct and diffuse effect of her death on Nelson’s girlhood and sisterhood, and a trip to Michigan Nelson took with her mother (Jane’s sister) to retrace the path of Jane’s final hours.

Each piece in Jane has its own form, and the movement from each piece to the next--along with the white space that surrounds each fragment--serve as important fissures, disrupting the tabloid, “page-turner” quality of the story, and eventually returning the reader to deeper questions about girlhood, empathy, identification, and the essentially unknowable aspects of another’s life and death. Equal parts a meditation on violence (serial, sexual violence in particular), and a conversation between the living and the dead, Jane’s powerful and disturbing subject matter, combined with its innovations in genre, shows its readers what poetry is capable of--what kind of stories it can tell, and how it can tell them.

Maggie Nelson is a poet, critic, scholar, and nonfiction writer. In 2016 she was received a MacArthur "genius" grant. She is the author of five books of nonfiction, including The Argonauts (Graywolf Press, 2015), which won the National Book Critics Circle Award in criticism and was a New York Times bestseller; a landmark work of cultural, art, and literary criticism titled The Art of Cruelty: A Reckoning (Norton, 2011), which was featured on the front cover of the New York Times Book Review and named a New York Times Notable Book of the Year; the cult classic Bluets (Wave Books, 2009), which was named by Bookforum as one of the 10 best books of the past 20 years; a memoir about her family, media spectacle, and sexual violence titled The Red Parts (originally published by Free Press in 2007, reissued by Graywolf in 2016); and a critical study of painting and poetry titled Women, the New York School, and Other True Abstractions (University of Iowa, 2007; winner, the Susanne M. Glassock Award for Interdisciplinary Scholarship). Her books of poetry include Something Bright, Then Holes (Soft Skull Press, 2007), Jane: A Murder (Soft Skull, 2005; finalist, the PEN/Martha Albrand Award for the Art of the Memoir), The Latest Winter (Hanging Loose Press, 2003), and Shiner (Hanging Loose, 2001). She has been the recipient of a 2012 Creative Capital Literature Fellowship, a 2010 Guggenheim Fellowship in Nonfiction, an NEA Fellowship in Poetry, and an Andy Warhol Foundation/Creative Capital Arts Writers Grant. She lives in Los Angeles.

"Not only is this a brilliant and deeply felt book, it is also a fascinating and necessary coda to American culture’s obsession with serial killers." ––Nicola Maye Goldberg, CrimeReads