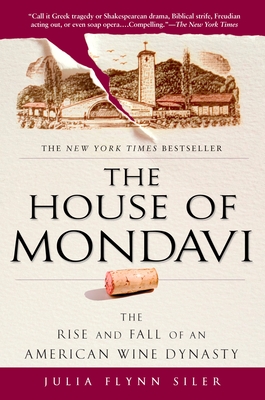 An epic, scandal-plagued story of the immigrant family that built—and then spectacularly lost—a global wine empire

Set in California’s lush Napa Valley and spanning four generations of a talented and visionary family, The House of Mondavi is a tale of genius, sibling rivalry, and betrayal. From 1906, when Italian immigrant Cesare Mondavi passed through Ellis Island, to the Robert Mondavi Corp.’s twenty-first-century battle over a billion-dollar fortune, award-winning journalist Julia Flynn brings to life both the place and the people in this riveting family drama.

The blood feuds are as spectacular as the business triumphs. Cesare’s sons, Robert and Peter, literally came to blows in the 1960s during a dispute touched off by the purchase of a mink coat, resulting in Robert’s exile from the family—and his subsequent founding of a winery that would set off a revolution in American winemaking. Robert’s sons, Michael and Timothy, as passionate in their own ways as their visionary father, waged battle with each other for control of the company before Michael’s expansive ambitions ultimately led to a board coup and the sale of the business to an international conglomerate.

A meticulously reported narrative based on thousands of hours of interviews, The House of Mondavi is bound to become a classic.

Julia Flynn Siler is the New York Times bestselling author of The House of Mondavi. Her most recent book, Lost Kingdom: Hawaii's Last Queen, the Sugar Kings, and America's First Imperial Adventure, is a San Francisco Chronicle bestseller. An award-winning journalist, she lives in Northern California with her husband and two sons. Please visit juliaflynnsiler.com for more information.