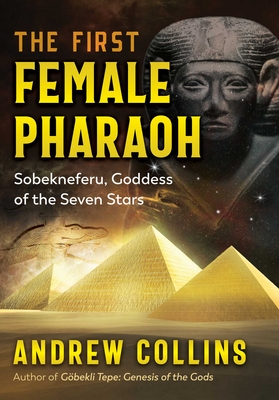 • Reveals the achievements of Sobekneferu, the political and religious issues of her age, the temples and ruins associated with her, and her continuing impact on ancient Egypt after her reign

• Discusses Sobekneferu’s magical beliefs and practices centered on the crocodile god Sobek, the hippo goddess Neith, and their representation as constellations

• Examines the modern-day resurrection of Sobekneferu among mystics and occultists of Victorian London, including her role in Bram Stoker’s shocking gothic novel, The Jewel of the Seven Stars

Cleopatra. Nefertiti. Hatshepsut. All of them are ancient Egyptian female rulers who rose above their predominantly patriarchal societies to become controllers of a great empire. Missing from this list, however, is Sobekneferu, ancient Egypt’s first female ruler. Why was the reign of this powerful woman all but forgotten?

Piecing together the lost history of the first female pharaoh, Andrew Collins presents the first comprehensive biography of Sobekneferu. Using every text and monument that concerns Sobekneferu and her time in power, he examines her achievements as ruler, the political and religious issues of her age, the temples and ruins associated with her, and her continuing impact on ancient Egypt after her reign. He explores her relationship with her brother Amenemhet IV, her sister Neferuptah, and their father Amenemhet III, regarded as one of the most beloved pharaohs of the Middle Kingdom. He examines Sobekneferu’s untimely end, the fate of her body, and the cult that developed in her name.

Discussing Sobekneferu’s magical beliefs and practices, Collins shows how they centered on the crocodile god Sobek, the hippo goddess Neith, and the circumpolar stars of the night sky in which they were personified. He also reveals how the setting of the Crocodile Star (Eltanin), the brightest star in the constellation of Draco, aligns with Sobekneferu’s suspected pyramid. Examining the modern-day resurrection of Sobekneferu among the occultists and mystics of Victorian London, Collins shows how she is the true inspiration behind every ancient Egyptian female queen who comes back to life after her tomb is found--as featured first in Bram Stoker’s shocking 1903 novel The Jewel of the Seven Stars and later in several modern blockbuster movies.

Revealing how Sobekneferu has left a lasting impact on culture and occulture through the ages despite being nearly erased from history, Collins shows how her continuing legacy is perhaps, ultimately, her true resurrection.

Andrew Collins is a science and history writer, who has been investigating the origins of human civilization for over three decades. He is a noted explorer and the co-discoverer of a massive cave complex beneath the Giza plateau, now known as “Collins’ Caves.” He is the author of several bestselling books, including From the Ashes of Angels and Gobekli Tepe: Genesis of the Gods. He lives in southeast England.