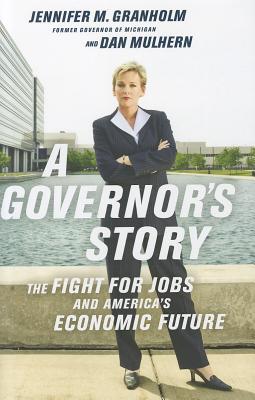 By Jennifer Granholm, Dan Mulhern
Out of Print

Jennifer Granholm was the two-term governor of Michigan, a state synonymous with manufacturing during a financial crisis that threatened to put all America's major car companies into bankruptcy. The immediate and knock-on effects were catastrophic. Granholm's grand plans for education reform, economic revitalization, clean energy, and infrastructure development were blitzed by a perfect economic storm.

Granholm was a determined and undefeated governor, who enjoyed close access to the White House at critical moments (Granholm stood in for Sarah Palin during Joe Biden's debate preparation), and her account offers a front row seat on the effects of the crisis. Ultimately, her story is a model of hope. She hauls Michigan towards unprecedented private-public partnerships, forged in the chaos of financial freefall, built on new technologies that promise to revolutionize not only the century-old auto industry but Michigan's entire manufacturing base. They offer the potential for a remarkable recovery not just for her state, but for American industry nationwide.

Jennifer Granholm was elected governor of Michigan in 2002 and re-elected in 2006. She was born in Vancouver, Canada, grew up in California, and is an honors graduate of both the University of California at Berkeley, where she now teaches in the law and public policy schools, and Harvard Law School. She is a senior advisor to the Pew Charitable Trusts Clean Energy Program, a contributor to Meet the Press, and a regular guest on other national news programs.Dan Mulhern is an honors graduate of both Yale University and Harvard Law School, teaches at the business and law schools at the University of California at Berkeley, and is an advisor to the Families and Work Institute. He is an author, talk show host, public speaker, and expert in leadership development and the changing roles of men and women. He is married to Jennifer Granholm.

“Governor Jennifer Granholm faced extraordinary challenges with grace, intelligence, and tenacity. In a weak economy, no state was hit harder than hers. She embraced the challenge of rebuilding Michigan’s economy for the 21st Century with new ideas, new jobs, and new businesses. In 2011, Michigan had the largest drop in unemployment in the U.S., thanks in large measure to her tireless effort. A Governor’s Story: The Fight for Jobs and America’s Economic Future is a remarkable narrative. Everyone who wants to revive the American economy and restore the American dream should read it.” —President Bill Clinton

“Jennifer Granholm spent eight years fighting for Michigan, and now the rest of the nation can benefit from the hard lessons she and her team learned as they positioned Michigan for recovery. A Governor’s Story offers a dramatic inside political story and an urgent call to recognize that our industry is competing not just with foreign companies but with the governments supporting them. It also offers a candid and moving personal story of a governor who is forced to devote her ‘all’ to turn around her state’s seemingly unyielding bad economy, with the resulting family pressures she faced as a loving wife and mother.” —U.S. Senator Carl Levin

“During her tenure as governor, Jennifer Granholm had to grapple with unprecedented economic crises that foreshadowed what other leaders around the world would eventually experience. A Governor’s Story is one leader’s recounting of what it’s like and what it takes to lead in the crucible of challenge and change. It is an engagingly personal, absolutely riveting, and completely honest story. As you walk in Jennifer Granholm’s shoes through the pages of this gripping narrative, you understand more fully the resilience, optimism, and grit it takes to lead in challenging times. Every executive, every politician, every student of leadership, and every citizen needs to read this book. There is hope here. A Governor’s Story gets my vote for the best leadership book of the year.” —Jim Kouzes, coauthor of the bestselling The Leadership Challenge and Credibility

“Governor Granholm is a passionate voice for manufacturing in America. During her time in office, she consistently put manufacturing front and center because it is so essential to the state's and the nation's economic vitality.” —Alan Mulally, President and CEO, Ford Motor Company

“Governor Granholm has governed during some of the toughest times I can remember in Michigan and has never wavered in her commitment and love for our state. From wind and solar energy to advanced batteries, she has championed the development of clean energy in Michigan and laid the groundwork for Michigan”s economic recovery and world-wide leadership in alternative energy.  She has been a strong partner with me in the fight to save our auto industry and American manufacturing.” —Senator Debbie Stabenow

“Now is the time to create the jobs of the future by growing industries, including a new clean energy economy.  And Jennifer Granholm has been all on top of this as the governor of Michigan. . . .  I want to applaud Governor Granholm…. The rest of the country should learn from the effort.” —President Barack Obama