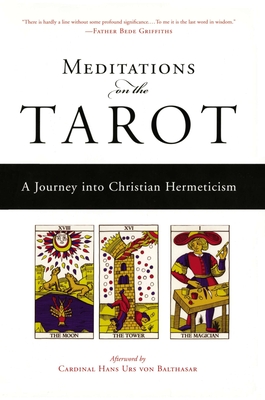 Now in a fully corrected edition, one of the true spiritual classics of the twentieth century.

Published for the first time with an index and Cardinal Hans Urs von Balthasar’s afterword, this new English publication of Meditations on the Tarot is the landmark edition of one of the most important works of esoteric Christianity.

Written anonymously and published posthumously, as was the author’s wish, the intention of this work is for the reader to find a relationship with the author in the spiritual dimensions of existence. The author wanted not to be thought of as a personality who lived from 1900 to 1973, but as a friend who is communicating with us from beyond the boundaries of ordinary life.

Using the 22 major arcana of the tarot deck as a means to explore some of humanity’s most penetrating spiritual questions, Meditations on the Tarot has attracted an unprecedented range of praise from across the spiritual spectrum.

Written anonymously and published posthumously in 1980 at the wishes of its author, Meditations on the Tarot has been translated from the original French by writer and esotericist Robert Powell, who lives in Germany. Widely considered one of the greatest Catholic theologians of the twentieth century, the Swiss-born Hans Urs von Balthasar, who wrote the afterword in this new edition, was nominated by Pope John Paul II as a cardinal in 1988, and died in June of that year, two days before his inauguration.

“It is without doubt the most extraordinary work I have ever read. It has tremendous spiritual depth and insight.”  —Trappist abbot Basil Pennington, OCSO

“It is simply astonishing. I have never read such a comprehensive account of the ‘perennial philosophy.’ ” —Father Bede Griffiths

“This book, in my view, is the greatest contribution to date toward the rediscovery and renewal of the Christian contemplative tradition of the Fathers of the Church and the High Middle Ages.”—Trappist abbot Thomas Keating, OCSO

“Meditations on the Tarot has become instrumental in my thinking….The writer – who calls himself ‘Unknown Friend’ – seems to be speaking to me directly, with endless wisdom and inspiration.” —Gerald Epstein, M.D., author of Healing Visualizations

“The most beautiful and instructive book of the twentieth century concerning Western esotericism.”—Antoine Faivre, professor for the History of Esoteric and Mystical Streams in Modern Europe, the Sorbonne University

“The book begs not only to be studied cover to cover, but also to be savored, meditated upon and assimilated into one’s life.” —Richard W. Kropf, National Catholic Reporter