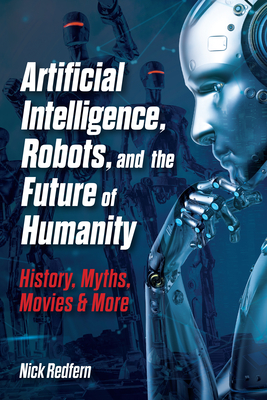 Will computers come to dominate man? Have films, books, and television foreshadowed the future of artificial intelligence? Will robots enhance or destroy our future? Will AI forever change us? You'll learn about the history and the pop-culture view of technology--as well as possible futures--in this one-of-a-kind book

Is technology running amok or is it serving as a helping hand? Artificial Intelligence, Robots, and the Future of Humanity puts a pop-culture and historic spin on some serious questions about mankind's future. An exhilarating and troubling read, it looks at whether robots are a menace or a boon to humanity. Its investigations include ... The history of robots constructed hundreds of years ago How movies informed the classic image of the robot--and what they got right and wrong Clones, modified humans, cyborgs, designer babies, and half-human robots The sentient internet The advancements in robotics starting in the 1960s Science fiction and science fact--and how science fiction foreshadowed the future Robots replacing people in the workplace The prospect of uploading our minds into computers to ensure immortality Robots becoming indistinguishable from humans Whether robots will rise up and cause humans to become extinct And much, much more.

Exciting and worrisome, Artificial Intelligence, Robots, and the Future of Humanity looks at what the past tells us about the future. With more than 120 photos and graphics, this tome is nicely illustrated. It also includes a helpful bibliography and an extensive index, adding to its usefulness. Ponder the possibilities with this examination of robots of the past, present, and future.