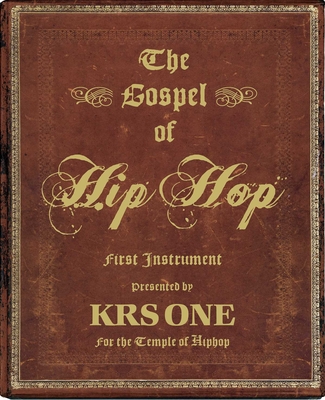 The Gospel of Hip Hop: First Instrument, the first book from the I Am Hip Hop, is the philosophical masterwork of KRS ONE. Set in the format of the Christian Bible, this 800-plus-page opus is a life-guide manual for members of Hip Hop Kulture that combines classic philosophy with faith and practical knowledge for a fascinating, in-depth exploration of Hip Hop as a life path. Known as "The Teacha," KRS ONE developed his unique outlook as a homeless teen in Brooklyn, New York, engaging his philosophy of self-creation to become one of the most respected emcees in Hip Hop history. Respected as Hip Hop's true steward, KRS ONE painstakingly details the development of the culture and the ways in which we, as "Hiphoppas," can and should preserve its future.

"The Teacha" also discusses the origination of Hip Hop Kulture and relays specific instances in history wherein one can discover the same spirit and ideas that are at the core of Hip Hop's current manifestation. He explains Hip Hop down to the actual meaning and linguistic history of the words "hip" and "hop," and describes the ways in which "Hiphoppas" can change their current circumstances to create a future that incorporates Health, Love, Awareness, and Wealth (H-LAW).

Committed to fervently promoting self-reliance, dedicated study, peace, unity, and truth, The "Teacha" has drawn both criticism and worship from within and from outside of Hip Hop Kulture. In this beautifully written, inspiring book, KRS ONE shines the light of truth, from his own empirical research over a 14-year period, into the fascinating world of Hip Hop.

KRS ONE is a philosopher, activist, author, lecturer, and emcee. Since founding canonical Hip Hop act Boogie Down Productions in the mid-1980s, he has released a granite-solid catalog of 19 full-length albums, along with a star-studded list of collaborations. In 1988 he founded the Stop the Violence Movement, a collective of artists, activists, educators, and entertainers exploring the roots of violence while working to promote the development of positive conflict resolution methods; he is currently producing an album celebrating the organization's 20th anniversary, with contributions by Nelly, Method Man, Busta Rhymes, The Game, Hakiem Green, Grant Parks, Duane "Da Rock" Ramos, and many others. KRS ONE is an accomplished public speaker who has delivered lectures at over 500 colleges, universities, and other venues. In addition to The Gospel of Hip Hop, he is the author of The Science of Rap (1995) and Ruminations (Welcome Rain, 2003). Currently, KRS-One is touring the United States with Stop the Violence, urging America's urban centers to seek non-violent conflict resolution over revenge and war.