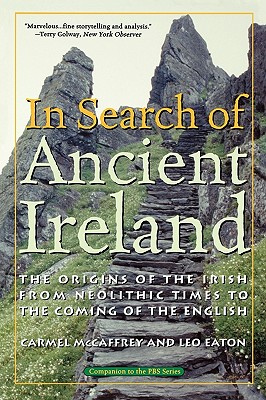 This engaging book traces the history, archaeology, and legends of ancient Ireland from 9000 B.C., when nomadic hunter-gatherers appeared in Ireland at the end of the last Ice Age to 1167 A.D., when a Norman invasion brought the country under control of the English crown for the first time. So much of what people today accept as ancient Irish history-Celtic invaders from Europe turning Ireland into a Celtic nation; St. Patrick driving the snakes from Ireland and converting its people to Christianity-is myth and legend with little basis in reality. The truth is more interesting. The Irish, as the authors show, are not even Celtic in an archaeological sense. And there were plenty of bishops in Ireland before a British missionary called Patrick arrived. But In Search of Ancient Ireland is not simply the story of events from long ago. Across Ireland today are festivals, places, and folk customs that provide a tangible link to events thousands of years past. The authors visit and describe many of these places and festivals, talking to a wide variety of historians, scholars, poets, and storytellers in the very settings where history happened. Thus the book is also a journey on the ground to uncover ten thousand years of Irish identity. In Search of Ancient Ireland is the official companion to the three-part PBS documentary series. With 14 black-and-white photos, 6 b&w illustrations, and 1 map.

Carmel McCaffrey lectures on Irish history, literature, culture, and language at Johns Hopkins University. A native of Dublin, she founded the literary review Wild About Wilde. She has also written In Search of Ireland's Heroes. She is a Gaelic speaker and frequently travels back to Ireland. She lives in Mt. Airy, Maryland. Leo Eaton has produced, written, and directed television and film in Europe and the United States for thirty years and has received many of television's major awards. London-born, he lives in New Windsor, Maryland.