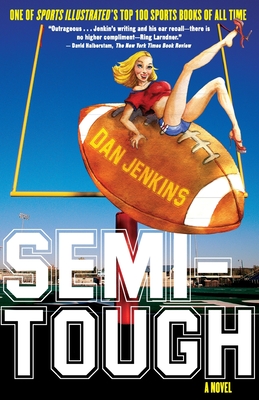 By Dan JENKINS
for information about purchasing this book, please contact orders@bookpassage.com

Made into a hilarious and timeless film starring Burt Reynolds, Kris Kristofferson, and Jill Clayburgh, and recently named number seven on Sports Illustrated's Top 100 Sports Books of All Time, Semi-Tough is Dan Jenkins's masterpiece and considered by many to be the funniest sports book ever written.

The novel follows the outsize adventures of Billy Clyde Puckett, star halfback for the New York Giants, whose team has come to Los Angeles for an epic duel with the despised "dog-ass" Jets in the Super Bowl. But Billy Clyde is faced with a dual challenge: not only must he try to run over a bunch of malevolents incarnate, but he has also been commissioned by a New York book publisher to keep a journal of the events leading up to, including, and following the game.

Infused with Dan Jenkins's characteristic joie de vivre and replete with cigarettes, whiskey, and wild women, Semi-Tough is an uproarious romp through a lost era of professional sports that will have any armchair quarterback falling out of his or her recliner in hysterics on a semi-regular basis.

Dan Jenkins is the author of ten novels, including Semi-Tough, Dead Solid Perfect, The Money-Whipped Steer-Job Three-Jack Give-Up Artist, and Slim and None. He has also published seven books of nonfiction, most notably Fairways and Greens and The Dogged Victims of Inexorable Fate and writes an enduringly popular monthly column for Golf Digest. Jenkins is the recipient of the William D. Richardson Award from the Golf Writers Association of America, which recognizes those who have consistently made outstanding contributions to golf. He divides his time between his native Fort Worth, Texas, and New York City.