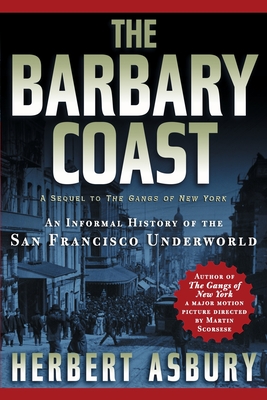 The history of the Barbary Coast properly begins with the gold rush to California in 1849. If the precious yellow metal hadn't been discovered . . . the development of San Francisco's underworld in all likelihood would have been indistinguishable from that of any other large American city. Instead, owing almost entirely to the influx of gold-seekers and the horde of gamblers, thieves, harlots, politicians, and other felonious parasites who battened upon them, there arose a unique criminal district that for almost seventy years was the scene of more viciousness and depravity, but which at the same time possessed more glamour, than any other area of vice and iniquity on the American continent. The Barbary Coast is Herbert Asbury's classic chronicle of the birth of San Francisco -- a violent explosion from which the infant city emerged full-grown and raging wild. From all over the world practitioners of every vice stampeded for the blood and money of the gold fields. Gambling dens ran all day including Sundays. From noon to noon houses of prostitution offered girls of every age and race. (In the 1850s, San Francisco was home to only one woman for every thirty men. It was not until 1910 that the sexes achieved anything close to parity in their populations.) This is the story of the banditry, opium bouts, tong wars, and corruption, from the eureka at Sutter's Mill until the last bagnio closed its doors seventy years later.

Herbert Asbury (1891-1963) was a prolific journalist, editor, newspaperman, and author of The Gangs of New York, The Barbary Coast, The French Quarter, Sucker's Progress, The Gangs of Chicago, and other books.