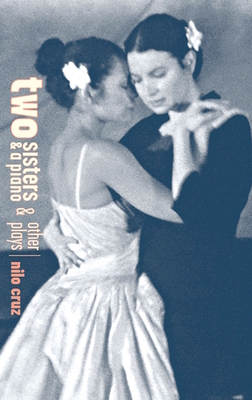 Nilo Cruz is the most produced Cuban American playwright in the United States and was the first dramatist of Hispanic descent to receive the Pulitzer Prize. In his plays, Cruz almost always journeys back to Cuba, even when the play is not set there. Cruz is a sensualist, a conjurer of mysterious voyages and luxuriant landscapes. He is a poetic chronicler, a documentarian of the presence of Latin people in American life. He conveys the strength and persistence of the Cuban spirit through a wholly dramatic imagination. This volume includes Two Sisters and a Piano, Hortensia and the Museum of Dreams, A Bicycle Country, Lorca in a Green Dress, and the one-act play, Capricho.

Two Sisters and a Piano
"Cruz's tightly constructed study of incarcerated sisters provides the spine for an authentic study of oppression that bends but never breaks the human spirit."--Variety

Beauty of the Father
"He is that rare American scribe who embraces the role of stage poet and the legacy of Tennessee Williams."--The Seattle Times

Hortensia and the Museum of Dreams
"Cruz explores all kinds of loss . . . lost childhood, lost freedom, lost innocence. Yet he infused Hortensia with joy, with desire, with humor and hope and healing."--The Miami Herald

Lorca in a Green Dress
"Like Lorca, Cruz is a lyrical writer in whom the surreal is grounded in the musical world of the senses . . . it is fresh, wonderful and dazzling."--Mail Tribune (Oregon)

Nilo Cruz is the author of many plays, including A Park in Our House, A Bicycle Country, Dancing on Her Knees, Night Train to Bolina and other works. He is a recipient of numerous awards, including the Pulitzer Prize for Drama, the Alton Jones Award and the Kesselring Prize. Mr. Cruz is a professor at the Yale School of Drama. He resides in New York City and is a New Dramatists alumnus.

Nilo Cruz, whose plays include NIght Train to Bolina, A Bicyle Country, Dancing on Her Knees, is one of the country's most produced Cuban-American writers. An alumnus of New Dramatists, Cruz has taught playwriting at Brown and Yale Universities.