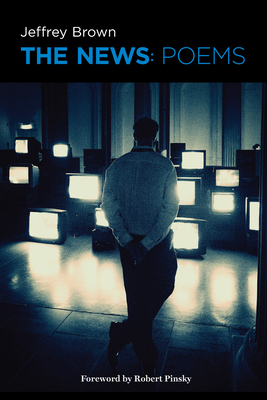 "The News is more than a venture into art by someone prominent in another field. In these poems, an unconventional subject for poetry is dealt with from within, by a real poet."--Robert Pinsky

As a nationally recognized correspondent and anchor for the PBS NewsHour, Jeffrey Brown has reported on important events around the world. In his debut poetry collection, The News, he re-imagines and re-tells his experiences through poems that explore stories he's covered, places he's gone, people he's met, the thrills and doubts of his profession, as well as the profound intimacy of family. In these pages we hear the narratives of artists, inmates, cadets, and survivors of the world's tragedies, as Brown conveys both suffering and triumph with a music that pays tribute to the multitude of human voices, opening his own life and expression for public viewing. Full of self-examination, brave honesty, and wry humor, The News captures not what's on one side of the lens but all that surrounds it.

In his introduction to the book, former U.S. Poet Laureate Robert Pinsky writes, Jeffrey Brown in this book apprehends some specific realities: the news as a medium and the news that is the medium's object. Brown's poetry examines that material in a new way, giving it a fresh, urgent form....By honoring the human voice, Jeffrey Brown has brought a remarkable, fresh kind of attention to these questions of identity and presence, delusion and awareness--in the specific realm of television news and in life itself."

Brown's experiences before the relentless eye of the camera and within the churn and pressure of the
perpetual news cycle as an Emmy Award-winning journalist and chief arts and culture correspondent for PBS' NewsHour shapes his strikingly forthright poems. Brown's directness is professional in origin, but he is keenly aware of and haunted by what's missing from the news, which is why he seeks 'another angle' in poetry.--Booklist

for there is no good way to put this--

we are here to show the horror of your life.

In Kacite they passed out purification tablets

displayed with pride their new latrine.

A woman sweeping her dusty steps--

asked to act naturally for the camera

to act as though we're not here--

more honest and aware than us, replied:

How can I pretend that you are not here?

Was that not you who spoke just now?

Jeffrey Brown is the chief correspondent for arts, culture, and society at PBS NewsHour. His work has taken him all over the world as he searches for the connections between news and poetry. He is the creator and host of Art Beat, which is NewsHour's online arts and culture blog. As a producer and correspondent, his work has earned him an Emmy the Cine Golden Eagle. He lives in Washington, DC.

Emmy award-winning journalist, Jeffrey Brown is the Chief Correspondent for Arts, Culture, and Society at PBS the NewsHour. He has interviewed artists and writers in addition to reporting from the field. His work has taken him all over the world, from Haiti to Myanmar as he searches for the connections between news and poetry. He is the creator and host of "Art Beat," which is the NewsHour's online arts and culture blog. As a producer and a correspondent, his work has earned him an Emmy, five Cine Golden Eagle Awards, and other honors. In 2014, he traveled across the country with Natasha Trethewey, former Poet Laureate of the United States, for the PBS NewsHour special poetry series "Where Poetry Lives." He lives in Washington, D.C.