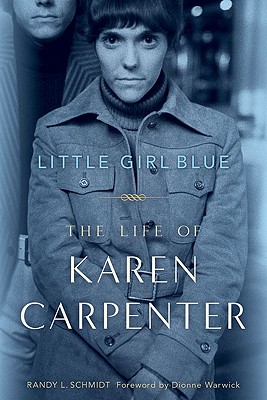 By Randy L. Schmidt, Dionne Warwick (Foreword by)
$26.95
Email or call for price

Little Girl Blue is an intimate profile of Karen Carpenter, a girl from a modest Connecticut upbringing who became a Southern California superstar.

Karen was the instantly recognizable lead singer of the Carpenters. The top-selling American musical act of the 1970s, they delivered the love songs that defined a generation. Karen’s velvety voice on a string of 16 consecutive Top 20 hits from 1970 to 1976—including “Close to You,” “We’ve Only Just Begun,” “Rainy Days and Mondays,” “Superstar,” and “Hurting Each Other”—propelled the duo to worldwide stardom and record sales of more than 100 million. During their short musical career, the Carpenters released ten studio albums, toured more than 200 days a year, taped five television specials, and won three Grammys and an American Music Award.

But that’s only a part of Karen’s story. Little Girl Blue reveals Karen’s heartbreaking struggles with her mother, brother, and husband; the intimate disclosures she made to her closest friends; her love for playing drums and her frustrated quest for solo stardom; and the ups and downs of her treatment for anorexia nervosa. After her shocking death at 32 years of age in 1983, she became the proverbial poster child for that disorder; but the other causes of her decline are laid bare for the first time in this moving account.

Little Girl Blue is Karen Carpenter’s definitive biography, based on exclusive interviews with her innermost circle of girlfriends and nearly 100 others, including professional associates, childhood friends, and lovers. It tells a story as touching, warm, and involving as any of Karen’s greatest songs.

Randy L. Schmidt compiled and edited Yesterday Once More and served as creative consultant for several television documentaries on the Carpenters, including the E! True Hollywood Story, A&E’s Biography, and VH1’s Behind the Music.

Dionne Warwick is a popular American singer, an actress, and activist; a United Nations Global Ambassador for the Food and Agriculture Organization; and the former United States Ambassador of Health.

"[A] heart-rending biography . . . The author relates Karen’s story in writing as fluid and affectless as her singing . . . As Schmidt details Karen’s unstoppable fall, Little Girl Blue becomes one of the saddest tales in pop . . . This compassionate book gives a tortured waif the third dimension she deserved."  —New York Times Book Review

“Told with compassion and understanding, this poignant and richly fascinating story of Karen Carpenter reads more like a novel you can’t put down than the extensively and impeccably researched biography it actually is.” —David Kaufman, author of Doris Day: The Untold Story of the Girl Next Door

“A fascinating, and at times harrowing, read. . . . Schmidt adds vital new information to our understanding of this contradictory and conflicted artist. . . . We know how her story ends, but Schmidt has made it as absorbing as it is deeply humane.” —Blurt

"The copious research and quick-moving narration make this a volume that die-hard Carpenters fans and casual listeners alike will find interesting."  —Publishers Weekly

“Like most of Karen Carpenter’s songs, this book pulls you in and triggers more emotion than you bargained for. Finally, the story of this angelic voice is told.” —Stephen Cox, author of The Munsters: A Trip Down Mockingbird Lane