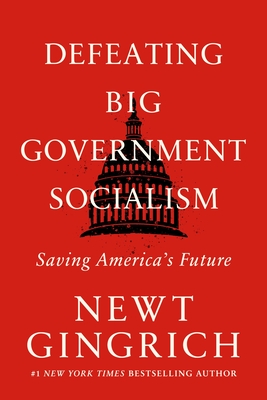 In communities across our country, Americans are debating Critical Race Theory, vaccine mandates, tax increases, rising inflation, online censorship, and a host of other important issues.

We have serious decisions to make about the future of our nation. Do we want big government, or limited government? Do we want to work hard and keep what we earn, or do we want government to decide how our money is spent? Do we want our children to learn how to think in school, or be told what to think? Do we want to make our own decisions about health care, or should the federal government dictate our treatments? Should American companies compete on a level playing field, or should Washington decide who wins and loses?

Speaker Gingrich analyzes these questions, describes the polling that shows what the American Majority wants, and illustrates how we can create a safer, more prosperous, and secure future for America.

In Defeating Big Government Socialism, best-selling author and former House Speaker Newt Gingrich explains how Americans must confront Big Government Socialism, which has taken over the modern Democratic Party, big business, news media, entertainment, and academia. He also offers strategies and insights for everyday citizens to save America’s future and ensure it remains the greatest nation on earth.

Newt Gingrich is a former Speaker of the U.S. House of Representatives and 2012 presidential candidate. He is Chairman of Gingrich 360, a multimedia production and consulting company based in Arlington, Virginia. He is also a Fox News contributor and author of 42 books, including Beyond Biden and many New York Times Best Sellers. He lives in McLean, Virginia, with his wife Callista L. Gingrich, former U.S. Ambassador to the Holy See and CEO of Gingrich 360.

“America is being crippled by a Big Government Socialist agenda. In this book, former Speaker of the House Newt Gingrich outlines how we can defeat these destructive policies and create the prosperous, safe country that the American Majority wants. This is a must-read.”—Sean Hannity, Radio and Fox News host

“Defeating Big Government Socialism is the fight I have dedicated my entire life to. Newt has spent more than two of my lifetimes doing the same. This book is the roadmap for how to win that fight, from a tested leader who I trust.”—Charlie Kirk, Founder and President of Turning Point USA