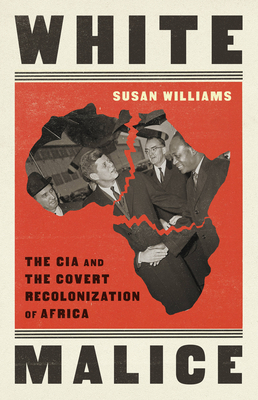 A revelatory history of how postcolonial African Independence movements were systematically undermined by one nation above all: the US.

In 1958 in Accra, Ghana, the Hands Off Africa conference brought together the leading figures of African independence in a public show of political strength and purpose. Led by the charismatic Kwame Nkrumah, who had just won Ghana’s independence, his determined call for Pan-Africanism was heeded by young, idealistic leaders across the continent and by African Americans seeking civil rights at home. Yet, a moment that signified a new era of African freedom simultaneously marked a new era of foreign intervention and control.

In White Malice, Susan Williams unearths the covert operations pursued by the CIA from Ghana to the Congo to the UN in an effort to frustrate and deny Africa’s new generation of nationalist leaders. This dramatically upends the conventional belief that the African nations failed to establish effective, democratic states on their own accord. As the old European powers moved out, the US moved in.

Drawing on original research, recently declassified documents, and told through an engaging narrative, Williams introduces readers to idealistic African leaders and to the secret agents, ambassadors, and even presidents who deliberately worked against them, forever altering the future of a continent.

Dr. Susan Williams is a senior research fellow in the School of Advanced Study, University of London. Her pathbreaking books include Who Killed Hammarskjöld?, which in 2015 triggered a new, ongoing UN investigation into the death of the UN Secretary General. Spies in the Congo spotlights the link between US espionage in the Congo and the atomic bombs dropped on Japan in 1945. Colour Bar, the story of Botswana’s founding President, was made into the major 2016 film A United Kingdom. A People’s King presents an original perspective on the abdication of Edward VIII and his marriage to Wallis Simpson.    Susan Williams lives in London.

“A deeply distressing history of CIA involvement in plots to eliminate certain regimes in Africa, particularly in the Congo and Ghana, just as the countries shook off European colonial rule in the mid-20th century… Rigorous reporting reveals “America’s role in the deliberate violation of democracy” in newly independent African nations.”—Kirkus Reviews, starred review

“Beautifully written and carefully researched. It is an important contribution to the history of Africa in the context of the Cold War, when the USA and the Soviet Union were locked in a struggle for African influence and control.”—Martin Plaut, former Africa Editor, BBC World Service News and author of Understanding South Africa

“In this masterpiece of historical analysis on the dirty tricks of the CIA in Africa during the 1960s, Susan Williams delivers her magnum opus. This richly documented narrative is based on outstanding scholarly research comprising archival sources from eight countries and the United Nations, plus numerous other written and oral sources … it could not be timelier in throwing light on the institutionalized racism and hypocrisy of Western powers.” —Georges Nzongola-Ntalaja Professor of African and Global Studies, University of North Carolina at Chapel Hill

“This meticulously researched book provides a compelling account of decolonisation and the forces that sought to thwart that chaotic, protracted, but ultimately liberating process. An informative read which, in examining the death throes of the rapacious colonial project, lays bare the profound injustice imperialism inflicted on Africa and beyond.”—Shashi Tharoor, Indian MP and author of Inglorious Empire

“White Malice is a triumph of archival research, and its best moments come when Williams allows the actors on both sides to speak for themselves.”—Africa is a Country

“Williams does a nice line in intrigue. There is a John le Carré quality to many of the episodes.”—Financial Times

“A new book from historian and academic Dr Susan Williams is always an eagerly awaited event – and White Malice: The CIA and the Neocolonialisation of Africa is no exception. Williams has woven together many of the themes of previous studies to present a searing indictment of how Western powers interfered with, plundered and sabotaged the interests of newly independent African nations and their leaders.”—African Business

“This is a book that every prospective leader in Africa must read."—Africa Briefing

“Her thesis threatens to disappear amid a forest of historical detail, but readers interested, especially, in Ghana and Congo will find her book absorbing.”—Boston Globe

“...[T]he author merits our heartfelt thanks for her indefatigable labor that has rescued a history that needs to be better known and will be instrumental in the final defeat of U.S. imperialism on the beleaguered continent.”—CovertAction

“Williams takes great care to provide evidence of just how far the CIA’s reach went, the organizations it funded, the many different ways it tried to gain access and the willingness to use violence to achieve their goal of a compliant and capitalist Africa…This book is essential reading.”—Spring Magazine

“Williams provides a vivid account of significant aspects of the [CIA] activity, informed by declassified material and rendered eminently readable by telling and energetically related anecdotes.”—Survival: Global Politics and Strategy