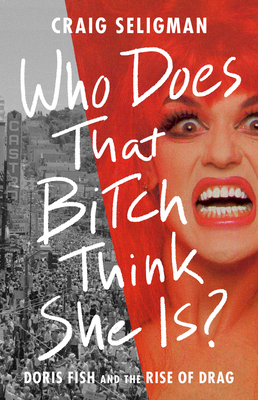 In the 1970s, queer people were openly despised, and drag queens scared the public. Yet this was the era when Doris Fish (born Philip Mills in 1952) painted and padded his way to stardom. He was a leader of the generation that prepared the world not just for drag queens on TV but for a society that is more tolerant and accepting of LGBTQ+ people. How did we get from there to here? In Who Does That Bitch Think She Is? Craig Seligman looks at Doris’ life to provide some answers.

After moving to San Francisco in the mid-’70s, Doris became the driving force behind years of sidesplitting drag shows that were loved as much as you can love throwaway trash—which is what everybody thought they were. No one, Doris included, perceived them as political theater, when in fact they were accomplishing satire’s deepest dream: not just to rail against society, but to change it.

From the rise of drag shows to the obsession with camp to the conservative backlash and the onset of AIDS, Seligman adds needed color and insight to this era in LGBTQ+ history, revealing the origins and evolution of drag.

Craig Seligman has written for and edited at a host of magazines, journals, newspapers, and websites. He is the author of Sontag and Kael: Opposites Attract Me (2004). He lives in Brooklyn.

“This smart, funny, and sexy queer history is a smash.”—Publishers Weekly

“An intimate feel to a lively read. Drag culture and camp humor hit it big…”—Kirkus

“A wonderfully constructed portrait of not only an important player in queer and drag history, but a document of an era that allowed for a more radical—anti-capitalist, anti-assimilationist, pro-freak—way of living for queer artists. This book filled me with longing and excitement, for both a lost past and the wild possibilities of our future.”—Michelle Tea, author of Knocking Myself Up and Against Memoir

“An entertaining look at the life of drag entertainer Doris Fish… who inadvertently shaped the fight for queer liberation. Campy, fabulous, and informative, Who Does That Bitch Think She Is? is more necessary than ever.”—Buzzfeed

“A perceptive portrait of [a] fascinating person… This honest and compassionate depiction of someone who was true to their passions will inspire readers.”—Library Journal

“[A] fantastic, immersive history of drag… mandatory reading for drag fans and queens of a certain age.”—EDGE Media Network