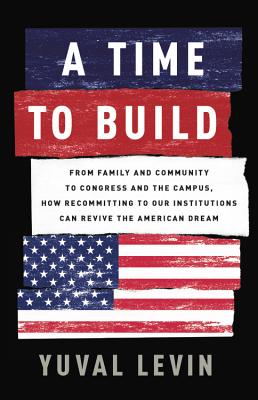 A leading conservative intellectual argues that to renew America we must recommit to our institutions
Americans are living through a social crisis. Our politics is polarized and bitterly divided. Culture wars rage on campus, in the media, social media, and other arenas of our common life. And for too many Americans, alienation can descend into despair, weakening families and communities and even driving an explosion of opioid abuse.
Left and right alike have responded with populist anger at our institutions, and use only metaphors of destruction to describe the path forward: cleaning house, draining swamps. But, as Yuval Levin argues, this is a misguided prescription, rooted in a defective diagnosis. The social crisis we confront is defined not by an oppressive presence but by a debilitating absence of the forces that unite us and militate against alienation.
As Levin argues, now is not a time to tear down, but rather to build and rebuild by committing ourselves to the institutions around us. From the military to churches, from families to schools, these institutions provide the forms and structures we need to be free. By taking concrete steps to help them be more trustworthy, we can renew the ties that bind Americans to one another.

Yuval Levin is the director of Social, Cultural, and Constitutional Studies at the American Enterprise Institute (AEI), where he also holds the Beth and Ravenel Curry Chair in Public Policy. The founder and editor of National Affairs, he is also a senior editor at The New Atlantis, a contributing editor at the National Review, and a contributing opinion writer at the New York Times. A former member of the White House domestic policy staff under George W. Bush, his previous books include The Fractured Republic and The Great Debate. He lives in Maryland.

"A Time to Build is exactly what America needs right now. A moving call to recommit to the great project of our common life. And from Yuval Levin, one of the most thoughtful and pertinent of our public intellectuals, who writes like a dream if dreams were always clear. What an encouraging book this is, and what an important one."—Peggy Noonan, Wall Street Journal

"As Yuval Levin writes in his profound forthcoming book, A Time to Build, Trump is an example of a person who wasn't formed by an institution. He is self-created and self-enclosed. He governs as a perpetual outsider, tweeting insults to members of his own cabinet. At its best, the impeachment process is an attempt to protect our institutions from his inability to obey the rules."—David Brooks, New York Times

"A provocative, inspiring look at the underlying cause of our polarization and dysfunction."—Kirkus

"In his excellent forthcoming book A Time to Build, Yuval Levin discusses how we've degraded our institutions by not letting them shape and constrain us, but instead using them as mere platforms."—Rich Lowry, National Review

"A Time to Build diagnoses the decline of institutions as the source of many social ills, including loneliness and despair, that have been attributed to other causes."—Mona Charen, National Review

"Mainstream Republicans dismayed by the current state of their party...will savor this well-reasoned and hopeful study."—Publishers Weekly

"In a political moment focused only on tearing down, Yuval Levin shows the necessity and the promise of institution-building. This book is an essential starting point toward an American renewal."—Senator Ben Sasse (R-Nebraska)

"Yuval Levin stands athwart the wrecking ball of anger that is smashing a democracy in desperate need of rebuilding and repair. A Time to Build sets forth an ambitious blueprint for how Americans can work together to strengthen broken institutions we cannot live without."—Bruce Reed, chief of staff to former Vice President Joe Biden

"There is a great deal of ruin in our society. Yuval Levin does not shrink from taking the full measure of our woes. But his counsel is not despair. This perceptive and important book sets an agenda for renewing the institutions we need in order to live and flourish together as Americans."—R.R. Reno, editor of First Thing

"In A Time to Build, one of the few mildly optimistic political books to come out in this winter of depressing ones, the conservative scholar (and editor of National Affairs) Yuval Levin argues for ... a comprehensive recommitment to American institutions - families and churches, academia and government - as an alternative to the current tendency to use them instrumentally, as a platform for partisan ambitions and personal desires."—Ross Douthat, New York Times

"The most thoughtful conservative theorist of his generation..."—Washington Post