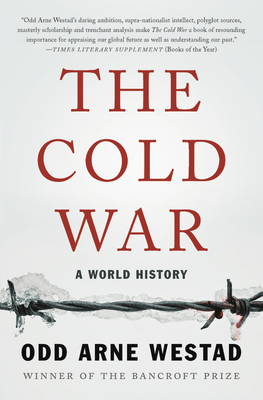 We tend to think of the Cold War as a bounded conflict: a clash of two superpowers, the United States and the Soviet Union, born out of the ashes of World War II and coming to a dramatic end with the collapse of the Soviet Union. But in this major new work, Bancroft Prize-winning scholar Odd Arne Westad argues that the Cold War must be understood as a global ideological confrontation, with early roots in the Industrial Revolution and ongoing repercussions around the world.

In The Cold War, Westad offers a new perspective on a century when great power rivalry and ideological battle transformed every corner of our globe. From Soweto to Hollywood, Hanoi, and Hamburg, young men and women felt they were fighting for the future of the world. The Cold War may have begun on the perimeters of Europe, but it had its deepest reverberations in Asia, Africa, and the Middle East, where nearly every community had to choose sides. And these choices continue to define economies and regimes across the world.

Today, many regions are plagued with environmental threats, social divides, and ethnic conflicts that stem from this era. Its ideologies influence China, Russia, and the United States; Iraq and Afghanistan have been destroyed by the faith in purely military solutions that emerged from the Cold War.

Stunning in its breadth and revelatory in its perspective, this book expands our understanding of the Cold War both geographically and chronologically and offers an engaging new history of how today's world was created.

Odd Arne Westad is the Elihu Professor of History and Global Affairs at Yale University and author and editor of fifteen books, including The Global Cold War, recipient of the Bancroft Prize, and Restless Empire, recipient of the Asia Society book award. He lives in New Haven, Connecticut.

"[An] epic account...One reason Mr. Westad's narrative is so strong is its use of fresh archival sources from across the globe...How Big Was the Cold War? is easy to answer: It was huge, as this book demonstrates, not only because of the perilous stakes but also because of the size of the two main actors. How Deep Was the Cold War? is also easy to answer, and Mr. Westad does that so very well, showing how it reached into so many places in the world that were a long way from the Berlin Wall."—Wall Street Journal

"[A] big, serious, and thoroughly intelligent stud[y] of the cold war."—New York Review of Books

"An account of the Cold War that is truly global in its scope... a wise and observant history... It also arrives at a moment when we must grasp the dynamics of the Cold War if we want to understand some of today's most urgent developments, from North Korea's acquisition of long-range nuclear missiles to the rise of socialist movements in Western democracies."—New Republic

"Rich with details drawn
from archival research and interviews with politicians, soldiers, scientists
and others who lived through the cold war.... Westad, a specialist on China as
well as on the cold war, adds a valuable dimension with chapters on Asian
countries and Latin America.... [An] ambitious study, perspicacious and panoramic
in scope."—Financial Times, Best Books of 2017

"Today, western attempts to
contain radical Islamism continue an us-and-them mentality. Angry Muslims decry
the perceived depredations of US imperialism and the infidel free market; the
threat posed by suicide bombers makes the old east-west rivalries look almost
manageable by comparison. Westad's huge, single-volume history is the beginning
of wisdom in these things."—Guardian

"A sweeping study.... In
astute, thematic chapters, Bancroft Award-winning historian Westad offers an
excellent sense of the ideological conflicts fulminating since the late 19th
century that formed the crux of the Cold War.... This is an enormous story, and
the author tackles it with admirable clarity and elegance.... A tremendous and
timely history lesson for our age."—Kirkus, starred review

"The Cold War evinces a lifetime of research and thought on the subject. Compelling ideas and valuable insights appear frequently."—National Interest

"In many ways, Westad has long argued, the Cold War made the world what it is today. His latest book is an eloquent and enjoyable defense of that proposition."
—Foreign Policy

"A clear and well-written
summary of a global conflict... an impressive book."—The Times

"Westad argues that the
Cold War made the world what it is today. Reading this fine history, it's
difficult to disagree with him. This is one of the best histories ever written
on the Cold War."—Omnivoracious

"This significant history is told with verve and spirit... An essential book for all collections and one of the best written so far on the Cold War."
—Library Journal

"[Westad] ably synthesizes contemporary scholarship to produce an accessible narrative that provides a fresh perspective on the conflict's pervasive global influence... an impressive feat that will be appreciated by scholars, students, and general readers."
—Publishers Weekly

"Westad balances the grim
nature of his study with sometimes thrilling insights and constantly lively,
almost conversational prose. Even in a book-market glutted with Russia-centered
histories, this one stands out."—Open Letters Monthly

"Rather than offering a straightforward historical overview, The Cold War delves much deeper, examining the philosophies underpinning the conflicting ideologies and the influence the systems had on their societies and economies. These complex ideas are written with great clarity and confidence, giving readers an exciting prose that only occasionally feels turgid through detail.... The book is a sobering opportunity to allow the recent history to give perspective to our own times and the dangerous ideas that persist."—Entertainment Focus

"[A] fast-paced narrative
peppered with delightful snippets from a broad range of sources... this volume
should sit on the bookshelf of every home as a constant reminder of how
stupidity, ignorance and arrogance almost brought the world to annihilation.
With the personification of all three traits now squatting in the White House,
this book has real and current value."—SouthChina Morning Post

"Arne Westad has produced a
grand narrative of the Cold War. Defining it as a struggle between capitalism
and socialism as well as a bipolar international system, he brilliantly
illustrates its ideological, geopolitical, technological, and economic
dimensions. Westad, the world's foremost scholar of the Cold War, once again
dazzles readers with the scope and depth of his analysis."—Melvyn P. Leffler, Professor of American History, University of Virginia

"Thanks
to Arne Westad, we can no longer think of the Cold War as a two-player game.
Westad gives us a new history of the rivalry between capitalism and communism,
tracing its origins back to the 1890s and showing that it had a kind of
afterlife beyond the 1990s. No one can match his ability to illuminate the
linkages between the Washington-Moscow rivalry that was the Cold War's fissile
core and the multiple "hot" wars that, on the periphery, constituted
the Third World's War."—Niall Ferguson, Hoover Institution, Stanford, and author of Kissinger, 1923-1968

"Arne Westad provides a
powerful analysis of why the Cold War occurred, what it meant, and why it still
matters. He is especially strong in elucidating the ideas of perfection that
drove very imperfect, often brutal, leaders. Westad's book links the Cold War
to globalization, recent wars in the Middle East, and American rivalries with
Russia and China. This is a book that everyone interested in politics and
foreign policy should read. It is a riveting story, told by one of the foremost
world historians."—Jeremi Suri, author of The Impossible Presidency

"For generations, the Cold War was context, the
inescapable setting of political life. This history sets the Cold War itself in
context, within the greater landscape of world history, deeply understood, and
masterfully presented. It is a powerful synthesis by one of our great
historians."—Timothy Snyder, author of Bloodlands