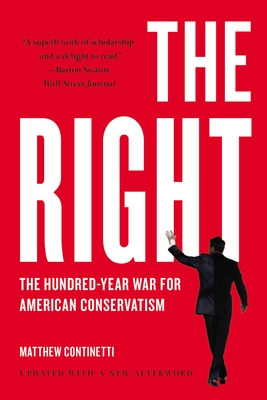 When most people think of modern conservatism, they think of Ronald Reagan. Yet this narrow view leaves many to question: How did Donald Trump win the presidency? And what is the future of the Republican Party?

In The Right, Matthew Continetti gives a sweeping account of movement conservatism’s evolution, from the Progressive Era through the present. He tells the story of how conservatism began as networks of intellectuals, developing and institutionalizing a vision that grew over time, only to see their creation buckle under new pressures from national populist movements. Drawing out the tensions between the desire for mainstream acceptance and the pull of extremism, Continetti argues that the more one studies conservatism’s past, the more one becomes convinced of its future.

Updated with a new epilogue, The Right is essential reading for anyone looking to understand American conservatism.

Matthew Continetti is a senior fellow and the Patrick and Charlene Neal Chair in American Prosperity at the American Enterprise Institute. He is also the founding editor of the Washington Free Beacon and a columnist for Commentary magazine. The author of The Persecution of Sarah Palin and The K Street Gang, he lives in Virginia.

“A superb work of scholarship and a delight to read. Conservatives will relish the anecdotes, the explanations of half-remembered books; liberals will learn something about their adversaries….invaluable clarity.”—Wall Street Journal, Best Politics Books of 2022

“Superb….[Continetti] brings an insider’s nuance and a historian’s dispassion to the ambitious task of writing the American right’s biography, and he adds a journalist’s knack for deft portraiture and telling details.” —Jonathan Rauch, New York Times

“The Right is readable and relatable, well-written and engaging. The author’s command of facts is impressive."—The Guardian

“[A] sturdy account of the many divisions within modern conservatism… Rational, well thought out, and impeccably argued—of interest to all students of politics.”—Kirkus, Starred

“Matthew Continetti’s The Right is a rich and detailed survey from the 1920s to now.”—Financial Times

“Continetti’s experiences have given him a valuable perspective on his subject… His description of life in the conservative machine has the feel of an eyewitness account.”—The New Republic

“Matthew Continetti applies what scholars of all persuasions should do with American conservatism, treating it as a complex, contradictory movement, often at war between its populists and its intellectual elite wings… Continetti is skilled in going places and making conclusions other rightists don’t.”
—The Federalist

“An authoritative account of the complex interplay between conservative ideas, politics, and policy over the past century… Continetti is particularly well-positioned to tackle the topic.”—The Public Discourse

“A much more nuanced and satisfying portrait of the American right than is offered by most other journalists and historians.”—Reason

"Continetti’s perspective is that of a consummate insider… He is, as a result, better attuned than most to the role of elites in the conservative ecosystem, as well as to the limits of their power.”—Unherd

“Continetti’s book is an excellent primer for understanding key aspects of the last century of American politics, and many of the author’s recommendations are very shrewd. He covers a tremendous amount of ground with lucidity and panache.”—American Purpose

"Important… Superior to any previous volume on this critical subject."—Quillette

“Matthew Continetti has written a superb history of the conservative movement.”—World Magazine

“[Continetti] skillfully leads us through the pulsing, fractious, improbable story of American conservatism all the way to today’s fractured Republican party…"—Mosaic

“With The Right, Matthew Continetti has written a fine, comprehensive, and readable narrative of the rip-roaring history of American conservatism with its amazing repertory company of statesmen, philosophers, and eccentrics. It’s a remarkable achievement and a great read…”—Claremont Review of Books

“Matthew Continetti has earned his luminous reputation as the foremost contemporary chronicler of American conservatism’s path to today’s problematic condition. He traces conservatism’s rich intellectual pedigree, from the founders’ classical liberalism through twentieth-century conservatives’ responses to the challenges of progressivism. The result is a thinking person’s map for the road ahead.”—George F. Will, author of The Conservative Sensibility

“Matthew Continetti has written an instant classic, sure to become the essential one-volume history of modern American conservatism. Balanced and subtle, it offers an engaging combination of intellectual and political history that makes sense of the immensely complicated story of the Right.”—Yuval Levin, author of A Time to Build

“Deft and authoritative, Matthew Continetti illuminates conservatism’s present through its long and often tumultuous past. The Right isn’t just an engaging history and incisive analysis of the intra-conservative debate, but an essential contribution to it.”—Rich Lowry, editor in chief of National Review

“An immensely useful contribution.”—Jonah Goldberg, editor in chief of The Dispatch

“A brilliant synthesis of political and intellectual history, and it captures several themes essential in this moment.”—Yuval Levin, director of social, cultural, and constitutional studies at the American Enterprise Institute