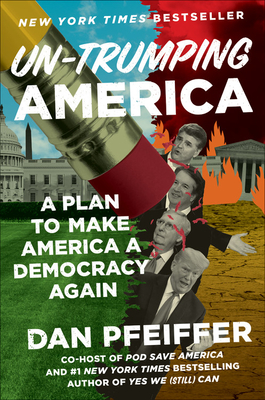 From the #1 New York Times bestselling author of Yes We (Still) Can and cohost of Pod Save America, a sharp political playbook for how Democrats can take on the right-wing circus dominating American politics.
​
There is nothing more important than beating Donald Trump in 2020, but defeating Trump is just the start of this timely book. Un-Trumping America offers readers three critical insights: first, Trump is not an aberration, but rather the logical extension of the modern Republican Party; second, how Democrats can defeat Trump in 2020; and third, preventing the likes of Trump from ever happening again with a plan to fix democracy.

While the catalog of the president's crimes is long and growing, undoing Trumpism—the political platform of racism, authoritarianism, and plutocracy that gave rise to Trump and defines the Republican Party—is a long and continuing fight. Through a craven, cynical strategy engineered by Mitch McConnell, funded by the Kochs, and fueled by Fox News propaganda, Republicans have rigged American politics to drown out the voices of the people in favor of the powerful. Without an aggressive response that recognizes who the Republicans are and what they have done, American democracy as we know it won't survive this moment and a conservative, shrinking, mostly white minority will govern the country for decades.

Un-TrumpingAmerica dismantles toxic Trumpism and offers a way forward. Dan Pfeiffer worked for nearly twenty years at the center of Democratic politics, from the campaign trail to Capitol Hill to Barack Obama's White House. But it was Trump's victory and Republicans' incessant aiding and abetting of Trumpism that has radicalized his thinking. Here, Pfeiffer urges Democrats to embrace bold solutions—from fixing the courts to abolishing the electoral college to eliminating the filibuster—in order to make America more democratic (and Democratic).

Un-Trumping America is a powerful call for Democrats and progressives to get smarter, tougher, and more aggressive without becoming a paler shade of orange.

Dan Pfeiffer is the #1 New York Times bestselling author of Yes We (Still) Can and a cohost on Pod Save America. One of Barack Obama's longest serving advisors, he was White House director of communications under President Obama (2009-2013) and senior advisor to the president (2013-2015). He currently lives in the Bay Area with his wife, Howli, and their daughter, Kyla.

"Pfeiffer is a fount of advice. A former bridge-builder, he now recognizes that outreach to the current GOP is a bridge to nowhere. UN-TRUMPING AMERICA is...clear-eyed about the limits as well as the appeal of the Obama vision."—Washington Post

"In a natural follow-up to his bestselling Yes We (Still) Can, Pfeiffer, a former senior adviser to President Barack Obama and co-host of Pod Save America, combines an unrelenting assault on Donald Trump and the GOP with outlines of a plan for Democrats to win elections and reverse the current course of the country."—Kirkus Reviews

"[UN-TRUMPING AMERICA] lays out the path for Democrats to save the day, not by beating Republicans at their own (dirty, he convincingly claims) game but by, like, actually doing democracy."—Booklist

PREVIOUS PRAISE FOR DAN PFEIFFER:
"Dan is one of the most brilliant observers of politics and media in America, and he's never lost faith in the idea that activism and public service are noble, worthwhile pursuits -- especially for young people who want to make a difference. We learned a lot from YES WE (STILL) CAN, and we literally host a show with the guy every week. In other words, we're annoyed that he saved the best stuff for the book." —Pod Save America cohosts Jon Favreau, Jon Lovett, and Tommy Vietor

"I love YES WE (STILL) CAN for many reasons, but most importantly because you will all get to know and learn from the best bro I know. Dan Pfeiffer's wit, brain, charm, humor, and compassion make him a formidable storyteller, the best colleague, and an even better friend. Also without him, I never would have learned how to tweet. Seriously."—Alyssa Mastromonaco, New York Times bestselling author of Who Thought This Was a Good Idea? and So Here's the Thing...

"YES WE (STILL) CAN captures the lessons of Yes We Did during the Obama years and offers clear lessons for why 2016 happened, and how progressives must adapt to win again."—David Plouffe, former campaign manager and White House senior advisor to President Obama

"In YES WE (STILL) CAN, Dan Pfeiffer has found a way to be nostalgic for the past while still motivating you in the present. Come for the uplifting stories about his journey with President Obama, stay for the honest (and optimistic) outlook on how Democrats can get their groove back and end the Trump era. A must-read for anyone who has asked the question: "'Now what do we do?'"—Jason Kander, New York Times bestselling author of Outside the Wire

"Amusing and insightful. This is a nostalgic and hopeful must-read for everyone who is unnerved by Trump, misses Obama, and is and determined to fight for a better future for the country."—Esquire

"A nostalgic look back and hopeful look forward."—Kirkus

"An entertaining work of memoir-cum-political strategy...Those who share Pfeiffer's admiration of Obama...will love both the chatty insider anecdotes and the advice."—Publishers Weekly